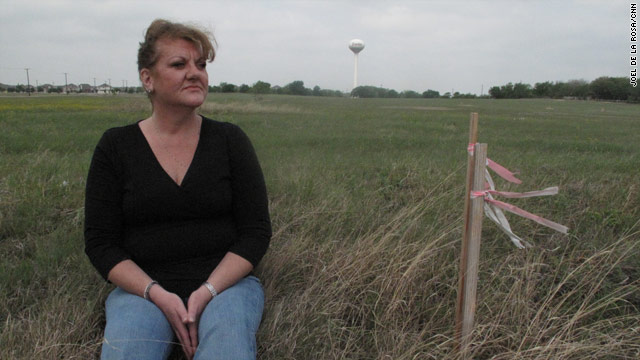 A government shutdown could sink Cami Stewart's dream of building a restaurant on this land in Justin, Texas.
April 8th, 2011
03:44 PM ET

How government shutdown would hurt Americans

Cami Stewart's dream of becoming the "Taco Queen" of Justin, Texas, could crumble if the federal government shuts down.

Stewart has spent 16 months developing a business plan and preparing paperwork for a million-dollar loan that needs approval from the Small Business Administration. She's building a Taco Mayo restaurant, a small, regional fast-food chain, from the ground up on a small parcel of undeveloped land.

If there's a shutdown, the SBA would suspend loan approvals, threatening Stewart's plan.

"I've been working and doing a lot of research trying to figure this out," she said.

Even a short shutdown could spoil Stewart's first efforts. She has until the end of April to close the real estate deal. She said other developers are also interested in the land and would swoop in and buy it if her loan doesn't come through in time.

"Every day matters. It's going to be hard for us to close by the end of the month," she said. "If the government shuts down, then that will delay us further and we lose our land contract then - you know, pretty much starting over."

Stewart said other pieces of land in Justin are much more expensive and would need thousands of dollars of extra work to get set up for a restaurant, and those expenses weren't part of her business plan.

Stewart spent 15 years working in the corporate world for Fidelity Investments. She decided to take a chance on going out on her own because she's a single mother of a 5-year-old girl with Down syndrome. She said she hopes becoming an entrepreneur will help her take better care of her daughter's needs.

"I just want the ability to be able to take my daughter to the specialists that she needs," Stewart said. "I don't mind working a lot of hours, but I just need that flexibility."

The threat of a government shutdown puts thousands of small businesses across the country in limbo. Some loans, such as Stewart's, would help fund start-up businesses. Some SBA loans help existing small businesses refinance debt. The SBA approves about $400 million in loans every week, according to an agency spokesman.

Ten ways a shutdown could ruin your day

To receive SBA loans, small businesses must get approval from bank lenders and the SBA. The SBA essentially guarantees those loans for the banks lending the money.

If there is a shutdown, most banks will continue to process these loans, but the SBA won't be around to sign off on them. The only SBA loans that would still be funded are part of the disaster loan program.

Several banking officials said small business loans would still be forwarded to the SBA but would then just sit in a line and would be processed in the order they were received after the government starts up again.

Ten ways a shutdown could make your day

A spokesman said agency officials are confident an agreement will be reached before the midnight Friday deadline. Nevertheless, the agency "is committed to providing detailed guidance to small businesses, entrepreneurs, lenders and our partners in the coming days if a lapse in funding looks likely," he said.

Stewart can only sit and watch the political theatrics and fighting over the budget in Washington from the grassy field in Justin where she hopes to start her first business.

When she's asked what she thinks of the politicians fighting over the budget, Stewart only smiles and says, "Isn't politics interesting?"

She's been on long-term disability and hasn't worked in three years, but that money has run out and she no longer has a steady income. A government shutdown wasn't part of the plan.

"I am worried. I need to start working," she said.