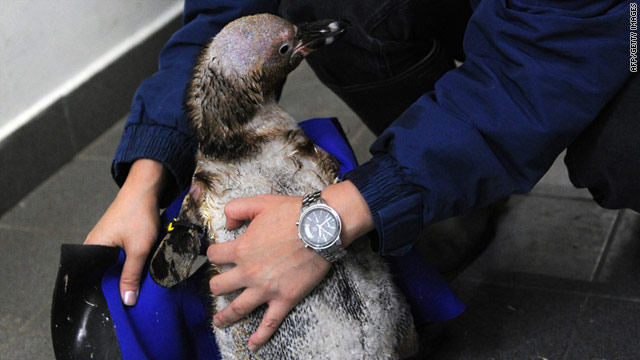 A worker puts a wetsuit on a featherless penguin to keep it warm earlier this week at the Jurong Bird Park in Singapore.
April 8th, 2011
03:40 PM ET

A mysterious ailment is causing penguins to lose their feathers, according to researchers at the Wildlife Conservation Society.

The condition, called feather-loss disorder, has been seen in penguin chicks in both sides of the Atlantic Ocean the past few years and is featured in a recent edition of the journal "Waterbirds," the conservation society said in a press release.

While scientists don't know what could cause a penguin to go "naked," possible culprits include genetics, nutrient imbalances, thyroid disorders or pathogens.

â€śWe need to conduct further study to determine the cause of the disorder and if this is in fact spreading to other penguin species,â€ť Dee Boersma, who has studied Magellanic penguins, said in the release.

Feather loss in pet birds has long been a common ailment seen by pet stores and private owners, but researchers studying the penguins in the Atlantic said this is something different.

â€śThe recent emergence of feather-loss disorder in wild bird populations suggests that the disorder is something new,â€ť Mariana Varese, acting director of the societyâ€™s Latin America and Caribbean program, is quoted as saying in the release. â€śMore study of this malady can help identify the root cause, which in turn will help illuminate possible solutions,â€ť she said.

While the illness does not appear to be fatal, the sick birds, unlike their feathered counterparts, linger in the sun instead of seeking refuge from the midday heat.Â  That behavior has led to several deaths, according to the release.

Disease is not the only recent peril that Atlantic penguins have faced.

A few weeks ago, volunteers from Nightingale Island, a British territory that is part of the Tristan da Cunha archipelago, mobilized to save tens of thousands of Northern Rockhopper penguins threatened by an oil spill.

It has been a surreal year in animal deaths. In January, tens of thousands of birds and fish were found dead in countries around the world.

Recently dolphins, some with oil inside them, have turned up dead in the Gulf of Mexico. Scientists donâ€™t know why.

Sensitivity surrounding marine life in the area is particularly high after the BP oil disaster that sent millions of barrels of crude into the Gulf of Mexico nearly a year ago.

"Even though they have oil on them, it may not be the cause of death," Blair Mase, the National Oceanic and Atmospheric Administration's marine mammal investigations coordinator, told CNN. "We want to look at the gamut of all the possibilities."