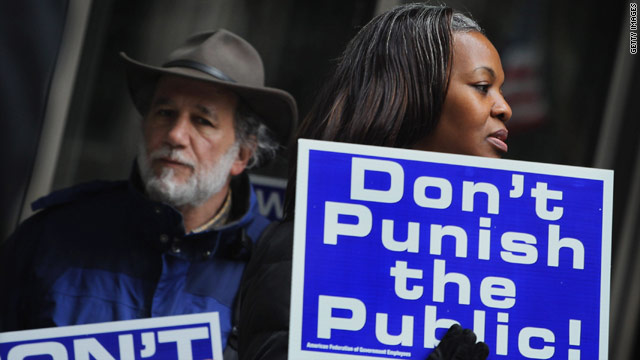 Federal employees demonstrate against a possible government shutdown outside a federal building Thursday in Chicago.
April 8th, 2011
09:15 AM ET

Looming government shutdown - Congressional leaders of both parties are searching for common ground on a federal budget, working against a deadline of midnight ET Friday. House Speaker John Boehner, R-Ohio, and Senate Majority Leader Harry Reid, D-Nevada, and their aides spent another long night negotiating, including a meeting with President Barack Obama at the White House. If an agreement is not reached in time, many federal government facilities - including national parks - and some services will shut down until funding can be re-established.

Trump - Recent "birther" convert and potential presidential candidate Donald Trump is set to meet Friday with an Arizona state lawmaker who is sponsoring a bill to require any presidential candidate to prove he or she was born in the United States. Trump, a real-estate mogul and reality TV star, told NBC that he has dispatched a team of investigators to Hawaii to establish whether Obama was born there. ď»żď»żCNN has debunked allegations surrounding the president's birthplace.

Libya - NATO conceded Friday it may have accidentally fired on Libyan rebel forces Thursday but refused to apologize. Former U.S. Rep. Curt Weldon is still in Libya, trying to arrange an audience with leader Moammar Gadhafi to discuss actions Gadhafi could take - primarily, giving up power - to end the conflict. Forces on the ground continue to fight for control of the strategically vital cities of Ajdabiya, al-Brega and Ras Lanuf.

Japan - Engineers are back at work at the damaged Fukushima Daiichi nuclear power plant after evacuating the area Thursday because of a magnitude 7.1 aftershock. Three deaths and 140 injuries were blamed on the latest quake. Japan's government has lifted restrictions on vegetables from some parts of the country's north after inspections found radiation levels consistently below legal limits.

Barry Bonds - Jury deliberations continue Friday in the federal perjury trial of former baseball star Barry Bonds. The major-league home run record holder is charged with lying under oath when he testified before a grand jury in 2003 that was investigating alleged sports doping.

Ivory Coast - Defeated Ivory Coast President Laurent Gbagbo was still hunkered down in the basement of his residence in Abidjan as soldiers loyal to him held off forces backing election winner Alassane Ouattara. "President Gbagbo needs to step aside," U.N. Secretary-General Ban Ki-moon said Thursday in Washington. "He has to cede power. This is his last chance. He has to mind the safety and prosperity of his people."