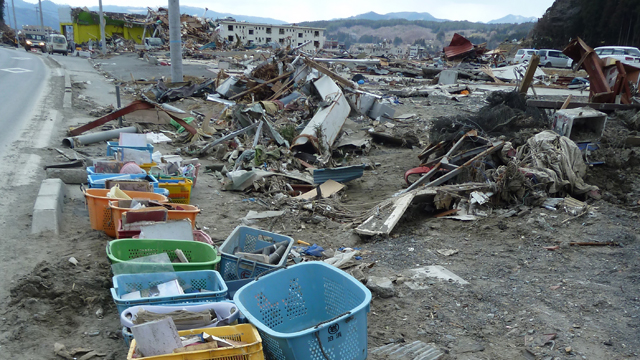 Hundreds of photos sit by the side of the road in the destroyed Japanese town of Minamisanriku.
April 11th, 2011
10:35 AM ET

It's been a month since an earthquake and subsequent tsunami rocked Japan, leaving more than 27,000 people dead or missing. From decimated towns that are far from recovery to the delicate reminders of how life used to be, today's Gotta Watch focuses on life in Japan one month after the crisis began.

Anatomy of a ghost town – It looks like any other town, except for one thing. It's devoid of life. Earthquake and tsunami damage forced so many residents from their homes. All that's left are the subtle signs of a hasty retreats and elevated radiation levels.

Finding memories in post-disaster town – Japan's crisis has left an eerie mark on its towns and cities. Photos litter the streets of towns ravaged by the tsunami. They are small indications of what life was like before the disaster.

Japan's new normal – Many foreigners who lived in Japan before the disaster have yet to return. Those who do find rebuilding their lives very complicated.

@jaketapper @TankSchottle Tank!!!! Very happy for you. Does that mean that one day when we meet you we can hug you?!
sarasidnerCNN

10:28 am ET April 21, 2021 RETWEET
Prince died on this day five years ago. He is gone but his music lives on. https://t.co/kvfKvuJoFe
sarasidnerCNN

8:10 am ET April 21, 2021 RETWEET
@EugeneDaniels2 @shaqbrewster I appreciate this so very much. Thank you.
sarasidnerCNN