The Supreme Court signals that it's unlikely to consider the fate of the Affordable Care Act before the 2020 presidâ€twitter.com/i/web/status/1â€¦eL

Hillary Clinton blasts Sen. Bernie Sanders in a new documentary and tells The Hollywood Reporter that she won't comâ€twitter.com/i/web/status/1â€¦qK 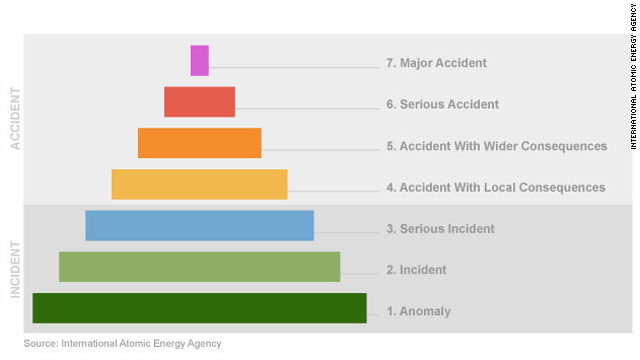 Japanese authorities Tuesday "provisionally" declared the Fukushima Daiichi nuclear accident a level 7 event on the international scale for nuclear disasters, putting the current crisis on par with the 1986 disaster at Chernobyl.

Regulators have determined the amount of radioactive iodine released by the damaged reactors at Fukushima Daiichi was at least 15 times the volume needed to reach the top of the International Nuclear and Radiological Event Scale, the Nuclear and Industrial Safety Association said. That figure is still about 10 percent of the amount released at Chernobyl, the agency reported.

The amount of radioactive Cesium-137, which has a half-life of 30 years, is about one-seventh the amount released at Chernobyl, according to the agency.

Level 7, a "major accident," is the highest level on theÂ event scale. The 1986 Chernobyl, Ukraine, event also was rated a level 7. For more information about the ratings,Â see this interactive.

10:07 am ET January 21, 2020 RETWEET
Global inequality is "out of control" because of biased economic systems that exclude many women while allowing bilâ€twitter.com/i/web/status/1â€¦uO
cnni

9:41 am ET January 21, 2020 RETWEET
Research since the 1970s has shown mixed results on weed's sleep-aiding benefits. Other studies have also found higâ€twitter.com/i/web/status/1â€¦gB
cnni