Oklahoma lawmakers have passed a bill banning abortion from the moment of "fertilization." The measure now goes toā€twitter.com/i/web/status/1ā€¦ZG

The January 6 committee is investigating the tour a Georgia Republican lawmaker gave to visitors the day before rioā€twitter.com/i/web/status/1ā€¦FR

Marnie Schulenburg, a soap opera actress who documented her journey from becoming a new mother to a cancer patient,ā€twitter.com/i/web/status/1ā€¦85

The accused gunman in the mass shooting at a Buffalo supermarket was indicted by a grand jury on Wednesday, accordiā€twitter.com/i/web/status/1ā€¦6O

President Biden will invoke the Defense Production Act, among other actions, in an effort to ease the national babyā€twitter.com/i/web/status/1ā€¦H6

Dow tumbles over 1,000 points and the S&P 500 is hovering on the precipice of bear market territory as US markets cā€twitter.com/i/web/status/1ā€¦8R

Secretary of State Antony Blinken says the US has reopened its embassy in Kyiv after it closed three months ago aheā€twitter.com/i/web/status/1ā€¦TM 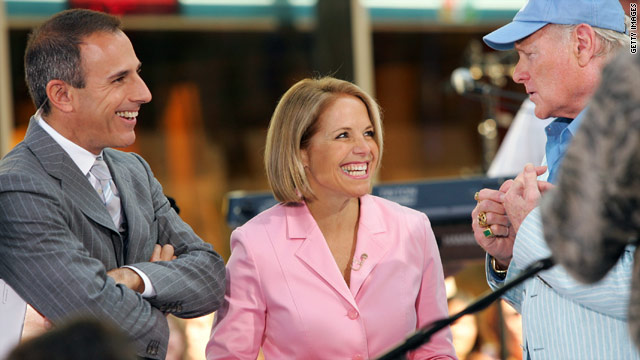 While his former "Today" co-host Katie Couric is apparently planning her departure from CBS News, The New York Times and Wall Street Journal report that Lauer might make a big move, too. He could leave the immensely popular "Today" show to join Couric and former NBC Chairman Jeff Zucker as they produce a syndicated talk show, the Times reports.

But NBC probably will make Lauer a huge contract offer to remain at the network. In its story on the possible move, The Wall Street Journal, citing Kantar Media, reported that "Today" brings in more than $500 million in advertising revenue yearly. Lauer has been a co-anchor on the show since January 1997. He has also been one of the NBC reporters at the most recent eight Olympics. His contract at NBC expires December 31, 2012.

"The 'Today' anchors are under contract, and beyond that we prefer not to comment on speculation and rumors," an NBC spokeswoman said in a statement to The Wall Street Journal.

Sullivan, a sports columnist at The Record in Bergen County, New Jersey, writes about being stopped from joining male reporters to interview golfer Rory McIlroy, whose dramatic collapse in the fourth round of the Masters was one of the riveting stories from Sunday's final round.

After being denied access to the locker room, Sullivan asked a security guard why she couldn't go in. She was told there was an open bathroom in the area.

Sullivan says she looked around for a tournament official and decided that instead of making an issue of it, she'd gather more information for her column. When she returned to the media room, she tweeted her disappointment:

Bad enough no women members at Augusta. But not allowing me to join writers in locker room interview is just wrong.

Sullivan writes in today's editions of the paper that other columnists, who were unaware she had been stopped, shared quotes with her and that an official apologized to her personally. The guard, part of the security force for the week, was wrong to deny her access, the official told her.

It was an embarrassing incident for the Masters, which had one of the most exciting finishes ever, writes Golf.com.

The authorized biography of Apple CEO Jobs will hit bookshelves and e-readers in early 2012, according to Mashable.

Isaacson, a former Time and CNN executive, will write the book, titled "iSteve: The Book of Jobs." Mashable reports that Isaacson received unprecedented access to the normally private Jobs and his family.

Isaacson has a penchant for "spotting the most influential people in any room and finding a way to get close to them," writes Fortune's Philip Elmer-DeWitt.

Jobs was diagnosed with pancreatic cancer in 2003. He had a liver transplant in 2009. On January of this year, he took his second medical leave from the company in the past two years.

Extreme temperatures and ongoing drought could cause the power grid to buckle across vast areas of the country thisā€twitter.com/i/web/status/1ā€¦cJ
CNNweather

9:12 am ET May 19, 2022 RETWEET
Northeastern India sees rounds of heavy pre-monsoon rain, causing over half a million people to flee their homes. cnn.it/3wzvVg5
CNNweather

Extreme temperatures and ongoing drought could cause the power grid to buckle across vast areas of the country thisā€twitter.com/i/web/status/1ā€¦cJ
CNNweather

9:12 am ET May 19, 2022 RETWEET
Northeastern India sees rounds of heavy pre-monsoon rain, causing over half a million people to flee their homes. cnn.it/3wzvVg5
CNNweather