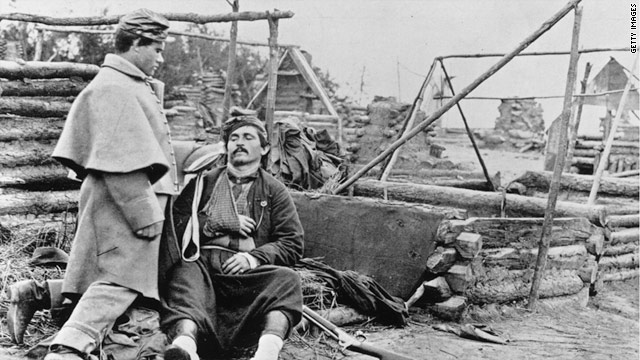 Comment of the day: "Abraham Lincoln was a Southerner himself - being born in Kentucky and such. Abe is my 4th cousin 4x removed!" –RoboCarrot

Readers got into a passionate discussion about what issues from the Civil War era are still alive today. CNN's article highlighted four traditionally touchy subjects: the disappearance of a political center, the debate over how much power the federal government should have, commitment to war effort, and the authority of the president. An interesting thread to emerge from the discussion was about states' rights in particular.

Purnell said, "The Civil War was fought to preserve a way of life based on slavery. The tired dodge about states' rights was and still is nothing but a fig leaf on a very big and ugly truth." SteveXS said, "Yes, the Southern secessionists believed they were patriots reaffirming the Founding Fathers' belief that the Colonies were free and independent states. But free and independent for what? To protect and maintain the institution of slavery."

waterford1 said our ancestors came to the United States to "flee the evils" of other systems, noting that states' rights were meant to "prevent a single centralized government or person to have too much control and power." waterford1 went on to say, "There is the Constitution, federal and state. Federal does not equal Constitution. The states and central federal governments are to strictly follow the Constitution which is supreme. The state laws are in many ways supposed to trump the federal laws or at least be able to modify them to fit each states specific need. We have been on a very slow but steady path of one centralized government that controls all."

kauppily disagreed about immigrants' motivations for coming to the states. "A large portion of American immigrants came here to seek better opportunity, which does not automatically mean they were fleeing a dictatorship." Also, Tacitus6 wrote, "Actually, the framers were quite specific that the Constitution is the supreme law of the land, superseding state law."

And SSBlurpe said, "All this whining and crying about political differences. Compared to the rest of the world, we have it pretty darn well. At least if we hate our leader we can vote him out in 4 years."

A story about the response to a French ban on burqas and niqabs, garments that obscure women's faces, got commenters into an intense conversation about a government's relationship with individual laws and beliefs. Most seemed to support the rule, although that wasn't true of everyone.

10001NYC said, "Some Muslim countries make all women (foreign or otherwise) wear a head scarf. Now one European country ban's full face covers. Seems about equal to me and neither bothers me. If I live in a country, I realize I will be required to abide by the laws of the land."

MissCreant said, "France is a self-proclaimed and self-determined secular country. If you wish to wear overt religious symbols that have democratically been declared illegal, then don't live there."

Many addressed the issue of safety and security when covered by a garment.Â cliffndort said, "If you are in a country other than your own, you abide by the law. PERIOD. And, frankly, any country that allows any person from anywhere to enter their country without full facial identification is a blatantly stupid country."

Some were torn.Â rmtaks wrote, "This is a tough one for me. On one hand I loathe the idea of a government banning any kind of expression, and consider it an egregious abuse of civil rights. On the other hand, the clothing in question is more often than not used by individuals to abuse the rights of others."

Others were concerned about what the garments represent.Â crls01 said, "I live in California. I once lived in a house where my neighbors were Islamic followers. It was truly sad to see these young, beautiful, potentially great female wives wear their 'burqas' for fear from their old, abusive husbands. Once the wives (while the husbands ran errands) came to our house seeking help and ultimately freedom."

The story of an Applebee's that accidentally served a Margarita instead of apple juice got the commenting juices flowing. svann said, "Maybe in a restaurant that serves minors its not a good idea to use old apple juice containers to store your margarita mix."

Some had fun with this story. Joking, PigPen1234 wrote, "I have a 2-year-old and I never give him alcohol anymore. He turns into a totally different person when we drink together and we always end up fighting."

Some could totally related. cryofpaine said, "Had this happen to me. I was staying with my grandma, and my uncle came home with a screwdriver. He put it in the fridge to get rid of later, but my grandma found it and thought it was just orange juice. Mistakes happen. I would seriously question the part about the kid possibly dying if he drank the whole glass. "

Many echoed cryofpaine, saying they thought it was an unfortunate occurrence but not something to worry excessively about. Serene1111 said, "It was an accident. The container was mislabeled. Glad he didn't die. But if the kid isn't harmed, time to move on."

In making that point, several commenters alluded to the possibility of lawsuits in their comments. MysticRiver said, "I'm glad the toddler was okay. I hope Applebee's picked up the cost of his medical care, and I also hope the parents let it go rather than rush on down to the nearest lawyer to see how much they can cash in on this incident."

donebyproxy said, "Sorry – parent is to blame. You don't give your child anything in a bottle that has not been boiled, and this applies to sippy-cups and anything else to touch your child's mouth, to the best of your possible ability. Taking you baby to such a place to begin with is questionable judgment, and NEVER give them something from somebody you just met....totally weak. You can't blame the restaurant here, but I bet they'll settle with the mother very quickly."

CDC vaccine advisers voted Sunday to recommend the Johnson & Johnson Covid-19 vaccine. It is the first of the threeâ€twitter.com/i/web/status/1â€¦0f
cnni

5:31 am ET March 1, 2021 RETWEET
At the heart of this war of words lies the complex question of who can legitimately claim to be Indian and who hasâ€twitter.com/i/web/status/1â€¦hY
cnni