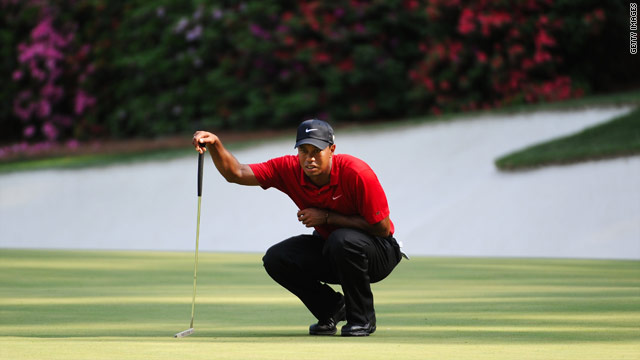 Whether Tiger Woods can continue the form he found at the Masters will depend on his putting, Golf.com's Gary Van Sickle says.
April 11th, 2011
05:23 PM ET

SI.com: A glimpse of the Tiger of yore

Rory McIlroy may have headed into Sunday's conclusion of the Masters poised for victory, but he left stunned and jacket-less as South Africa's Charl Schwartzel took top honors. But nearly as impressive as Sunday's victory in Augusta, Georgia, was the return of a newly energized Tiger Woods of yesteryear.

Before the scandal, the dropped sponsors and the divorce, Woods was an exceptional talent and the scope of his skill was once again seen on Sunday. Golf.com's Gary Van Sickle explains that Woods' last-day push at the Masters showed the extent of the golfer's skill:

"He loudly announced his return on this sunny, humid afternoon in Georgia, and it was a beautiful thing to see again, no matter what you think about him," Van Sickle writes. "He birdied the second and third holes with vintage precise shots and putts. He stuffed an iron shot close at the sixth for another birdie, and followed it with his fourth of the day on the seventh hole."

But that wasn't all. If four straight birdies weren't enough to announce the return of the Masters' youngest winner, then maybe "a hooking 3-wood that scampered onto the green like an Olympic sprinter and rolled to a stop 10 feet from the cup" did. Though Woods came up short and showed his trademark frustration during his post-round interview, his performance was stellar.

But is it too early to declare Woods is back to the form that made him golf's golden boy throughout the 2000s? According to Van Sickle, it’ll all come down to what he does on the greens:

"How far Tiger's resurgence goes will depend on his putting. He dominated for so long because he was the best putter of his generation. Like the great Jack Nicklaus, Woods seemed to make every putt he needed to make, every putt that mattered. He probably didn't, but that's what we remember about Tiger. And Jack, too.”

With the Masters over, here's what else you have to look forward to:

Miami Heat vs. Atlanta Hawks (7 p.m. ET) - The Heat will be looking to move closer to locking in a No. 2 seed when they take on the Atlanta Hawks at Philips Arena.

76 – Winless streak ended by Roush Fenway driver Matt Kenseth with his win under the lights at Texas Motor Speedway. Brant James reviews the five things he learned from a wild weekend at TMS.

27 – Number of points scored by LeBron James in the Heat's faceoff against the Boston Celtics.

1984 – The year Minnesota Duluth made its last title appearance in the NCAA hockey championship. The team took home its first-ever title in a thrilling 3-2 victory over Michigan on Saturday. Sarah Kwak relives the action here.