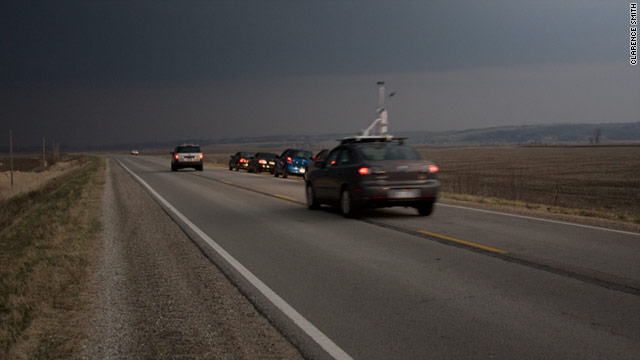 U.S. hit with a weird combination of fire, water and ice

Hailstones covered a beach in Southern California over the weekend; tornadoes tore up a small town in Iowa; residents of Fargo, North Dakota, escaped a flood threat; and West Texas is battling the biggest wildfire outbreak in its history.

The crazy weather is expected to continue today, with record temperatures predicted along the East Coast. Highs will top 80 as far north as Philadelphia, and it will feel like summer in the South. But an advancing cold front will set off a line of potentially severe storms from Texas to the Great Lakes, according to the National Weather Service. That line will head east into the evening.

Residents of Newport Beach, California, were soaking in a Jacuzzi, enjoying an unseasonably cool night, when the skies opened up, CNN affiliate KTLA reports.

At first they thought they were being pelted by raindrops, but it stung. The hail-snow combo covered the sand with icy pellets - and was the first time many residents had seen snow on the beach.

The small town of Mapleton, Iowa, was heavily damaged by a tornado Saturday night, but no deaths were reported. About 60% of Mapleton was damaged or destroyed, an official told KETV. The tornado leveled about 12 blocks on the southwest side of town.

Flooding was the issue farther north as the Red River threatened a repeat of the devastating floods of the past two springs in Fargo, North Dakota, and Moorhead, Minnesota, according to KXJB.

The Red River crested at nearly 41 feet in 2009, but residents are breathing a sigh of relief Monday as the river recedes after cresting at just under 40 feet. Meanwhile, more than 600 members of the National Guard are helping out in other parts of the state that experienced flooding.

In West Texas, the Rock House fire burned at least 60 structures in and around Fort Davis and knocked out power to the community, according to KWES. Fort Davis schools were closed Monday. Another grass fire, dubbed the Hickman fire, burned about 40 buildings, including homes, in Midland County. And two large fires are burning near Alpine in northern Brewster County.