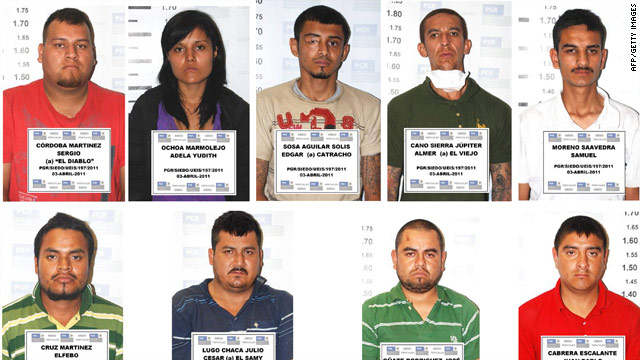 Nine of the 17 people who have been detained in connection with the bodies are shown in this picture released by the Mexican attorney general's office.
April 12th, 2011
06:00 PM ET

The Zetas drug cartel is believed to be behind the mass graves recently discovered in northern Mexico, authorities said Tuesday.

Mexican Attorney General Marisela Morales said that 116 bodies have been found and that 17 suspects have been detained in connection to the killings.

Authorities began finding the graves last week during an investigation into a report of the kidnapping of passengers from a bus in late March. The investigation led them to San Fernando, Mexico, the same place where the bodies of 72 immigrants were found at a ranch last August.

The Mexican state of Tamaulipas, where San Fernando is located, is one of Mexico's most active states when it comes to drug trafficking. The Zetas cartel and the Gulf cartel operate in the state and have strongholds there.

Thailand reported its highest number of Covid-19 deaths in a single day Tuesday as officials struggle to contain aâ€twitter.com/i/web/status/1â€¦2M
cnni

12:31 pm ET May 18, 2021 RETWEET
A disaster has been declared in an Alaskan village after an ice jam caused severe flooding and forced residents toâ€twitter.com/i/web/status/1â€¦Zj
CNNweather

12:00 pm ET May 18, 2021 RETWEET
India was slammed on Monday by the strongest storm on record to reach its west coast, hampering authorities' responâ€twitter.com/i/web/status/1â€¦JM
cnni