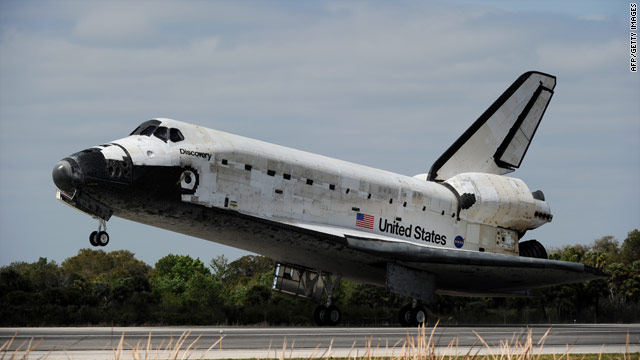 The space shuttle Discovery lands March 9 at Kennedy Space Center at the end of its final mission. Where will it go next?
April 12th, 2011
09:26 AM ET

Shuttle retirement home - NASA will announce where space shuttles Discovery, Endeavour and Atlantis will spend their retirement years - which could mean millions in tourism revenue. Among the places in the running are Kennedy Space Center in Florida, the Smithsonian Institution in Washington, New York, Houston, Chicago, Seattle and Dayton, Ohio. Tuesday is the 30th anniversary of the first shuttle launch.

Spaceflight anniversary - Speaking of spaceflight anniversaries, Tuesday marks 50 years since the first time a human entered space. On this date in 1961, Soviet cosmonaut Yuri Gagarin took a nearly two-hour ride into space and back aboard the Vostok 1 rocket before he and his capsule parachuted safely back to Earth.

Civil War anniversary - And, lest we forget, Tuesday also marks the 150th anniversary of the start of the Civil War, which began with Confederate forces' pre-dawn shelling of the Union garrison at Fort Sumter, South Carolina. Over the next four years, 600,000 Americans would die and thousands of slaves would go free. But some of the wounds have never healed, as a CNN/Opinion Research Corp. poll indicates.

Conflict in Libya - The civil war in Libya rages on after rebels seeking to oust leader Moammar Gadhafi rejected an African Union cease-fire proposal. The back-and-forth conflict could lead the country into violent anarchy like Somalia's, Gadhafi's former foreign minister warned in a BBC interview Monday.

Federal budget - In Washington, lawmakers are putting the finishing touches on the budget deal reached last weekend. Meanwhile, President Barack Obama and members of Congress are working on plans for next year's budget, hammering out goals for taxation and spending.

Barry Bonds trial - The jury in former baseball star Barry Bonds' perjury trial enters its third day of deliberations Tuesday. Bonds is accused of lying to a federal grand jury in 2003 about knowingly taking anabolic steroids and getting injections from anyone but his doctors.