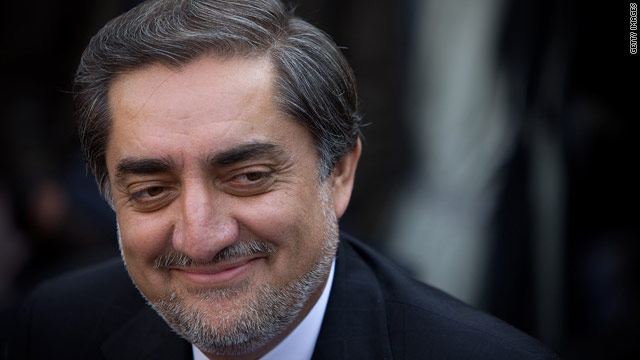 The former Afghan foreign minister, considered the chief opposition leader to President Hamid Karzai, is in Washington to speak at the 2011 U.S.-Islamic World Forum, which begins Tuesday. Appearing on NPR on Tuesday morning, Abdullah repeated his allegation of rampant corruption in the Karzai government. He withdrew from the 2009 Afghan presidential election in protest over his accusations of a fixed vote for Karzai. On April 21, Abdullah will appear at the National Press Club in Washington.

The Egyptian blogger, 25, faces three years in prison for criticizing Egypt's ruling military council with allegations of brutality. It is the first trial of a blogger held by the military leaders who took charge in February after the overthrow of President Hosni Mubarak. The ruling stands as a warning for all journalists, bloggers and human rights activists who dare to dissent, attorney Adel Ramadan told The New York Times. "Maikel is the first prisoner of conscience in Egypt after the revolution," Ramadan told the Times.

The Tucson, Arizona, nurse will be on Capitol Hill on Tuesday to lobby for a ban on large-capacity ammunition magazines, The Huffington Post reports. O'Brien's fiancé, Gabe Zimmerman, a senior aide to U.S. Rep. Gabrielle Giffords, was one of six people killed in the January shootings in Tucson that severely wounded the congresswoman. The gun used in the shooting had a large-capacity magazine that allowed the shooter to fire 30 rounds in about 15 seconds.

The "60 Minutes" correspondent could succeed Katie Couric at the "CBS Evening News" anchor desk. Like Dan Rather, Pelley hails from Texas, and is said to be a throwback to the Walter Cronkite era of CBS News. When Pelley filled in for Couric last year, he "played the part" as managing editor, reviewing scripts with correspondents and offering praise following the broadcast, a senior official told The New York Times. "Everyone thought, ‘This would be heaven’ ” if Pelley were to get the gig, the source told the Times.

The Olympic rowers, identical twins and Harvard alums who claim to have created the concept behind FaceBook, have been told by a federal appellate judge that their effort to revise a $65 million settlement with Facebook founder Mark Zuckerberg is over.