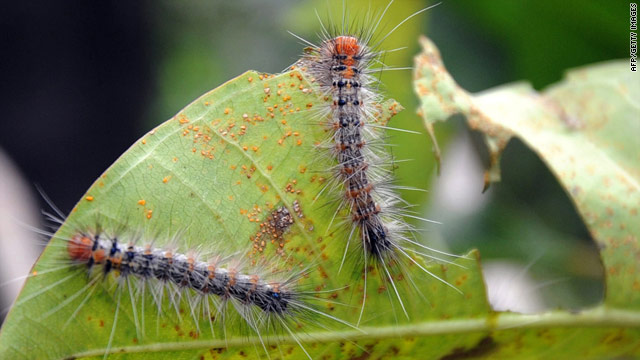 Caterpillars crawl over a leaf in Denpasar on the Indonesian island of Bali on Wednesday.
April 13th, 2011
08:38 AM ET

Parts of Indonesia are under siege by swarms of hairy caterpillars, which are getting into homes and causing skin rashes, according to local news reports.

“The caterpillars are very disturbing. They crawl into the house and make our skin itch for days. They have long hairs,” a Jakarta resident identified as Nurhayati told the Jakarta Globe.

A caterpillar swarm was first reported in East Java two weeks ago, according to the Globe, and new swarms have been observed in Bekasi, West Java, and Buleleng, Bali.

The caterpillars are targeting the leaves of mango trees in Bali, according to a Bali Times report.

Bali agricultural chief Made Putra Suryawan said Wednesday that authorities there are spraying insecticide and burning garbage to stop the spread of the insects, according to an Agence France Presse report on kompas.com.

Suryawan said the species of caterpillars had not yet been identified. Their elevated numbers could be caused by a lack of predators, he said in the AFP report.

“There’s a reduction in the number of birds and ants that feed on these caterpillars. People catch the birds to sell them and catch the ants to feed their pet birds,” Suryawan is quoted as saying.

One politician has his own theory about the caterpillar swarm, according to the Jakarta Globe: It's a warning from God.

“Yes, it was God’s warning,” House of Representatives Speaker Marzuki Alie of the ruling Democratic Party said at the assembly. “It is God’s warning that we should introspect and make changes. Every incident has a meaning behind it.”