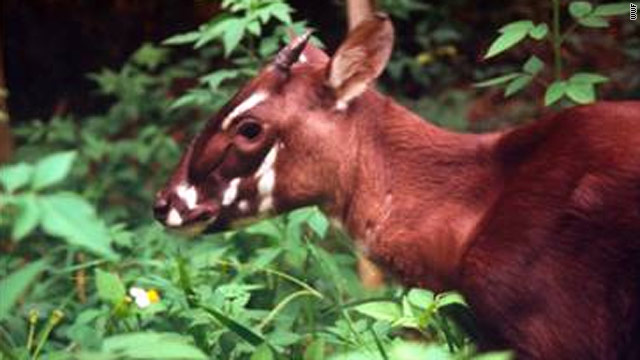 The rarity of the saola gives it mythical status in some parts of Asia, with some referring to it as Asia's "unicorn."
April 13th, 2011
07:02 PM ET

Reserve established for one of world's rarest animals

Vietnamese officials are setting up a nature reserve to protect one of the world's rarest animals, the saola, sometimes known as Asia's "unicorn."

A few hundred are believed to remain in the wild, inhabiting the Annamite Mountains along the border of Vietnam and Laos in Southeast Asia, according to the World Wildlife Fund, which, along with the Quang Nam Provincial Forest Protection Department, announced the establishment of the Saola Nature Reserve in the province.

None of the animals are in captivity, and the few that have been caught have survived only a short time, including one that villagers in Laos captured last year.

“The establishment of this new Saola Nature Reserve shows a strong commitment by the Vietnamese government and Quang Nam Province in the conservation of this highly threatened endemic species,” said Tran Minh Hien, country director of WWF-Vietnam, said in a press release. “This new reserve will create a biodiversity corridor connecting the East of Vietnam to West side of Xe Sap National Park in Laos.”

The saola is about 3 feet tall, weighs as much as 220 pounds and has two closely spaced horns that can reach almost 20 inches in length, according to the WWF.

WWF forest guards and rangers will patrol the area, looking for snares set for wild boar and barking deer that also could trap the saola. The animals also have been hunted for their horns, which are prized as trophies, according to the WWF.

The saola was first discovered in 1992, and the one captured in Laos last year was the first confirmed sighting of the animal since 1999, according to the International Union for Conservation of Nature.

The rarity of the saola gives it mythical status in some circles, according to that organization. Although the saola has two horns, it may be the basis of the Chinese unicorn, the qilin, the group says. It is unknown if the saola ever existed in China, however.