Twitter's Jack Dorsey releases a statement on his decision to step down as CEO cnn.it/3rkuqkM

Lee Elder, the first Black golfer to play at the Masters, is dead at 87 cnn.it/3I0ODC9

Twitter CEO Jack Dorsey intends to step down, a report says. Shares in the company jump as much as 10% on the news. cnn.it/3I1Pd2w

Manchester United appoints Ralf Rangnick as the club's interim manager until the end of the season cnn.it/3D354Ks 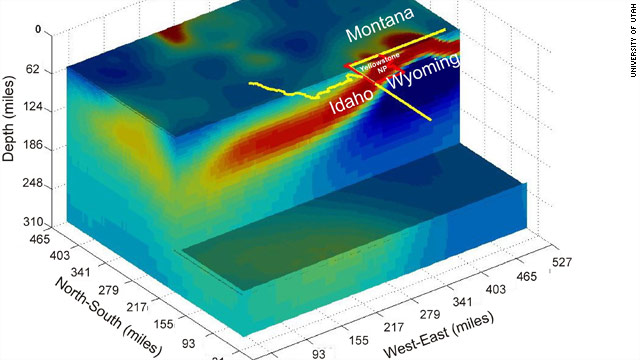 A new kind of image suggests the giant volcanic plume lying under Yellowstone National Park is even bigger than previously thought.

University of Utah geophysicists used the electrical conductivity of the huge tongue of hot and partly molten rock to create an image. That image suggests the plume is even bigger than it appears in earlier images made with seismic waves.

"It's like comparing ultrasound and MRI in the human body; they are different imaging technologies," geophysicist Michael Zhdanov, principal author of the new studyÂ and an expert on underground structures, said in a news release from the university.

A 2009 seismic study showed the plume dips downward from Yellowstone at an angle of 60 degrees and extends 150 miles west-northwest to a point at least 410 miles under the Montana-Idaho border - as far as seismic imaging could "see."

In the new study, images show the electrically conductive part of the plume dipping more gently, at an angle of perhaps 40 degrees to the west, and extending perhaps 400 miles from east to west. The geoelectric image can "see" only 200 miles deep.

The University of Utah study will be publishedÂ soon in the journal Geophysical Research Letters.

2:47 pm ET November 29, 2021 RETWEET
The marvelous @lisaling did a marvelous job telling the story of the #OsageNation on This is Life. Itâ€™s a story Itwitter.com/i/web/status/1â€¦KH1B
sarasidnerCNN

1:59 pm ET November 29, 2021 RETWEET
All adults in the UK will be able to get their booster Covid-19 vaccine doses three months after their second shot,â€twitter.com/i/web/status/1â€¦dc
cnni

12:30 pm ET November 29, 2021 RETWEET
Jack Dorsey, the cofounder and public face of Twitter, will step down from his role as CEO, effective immediately,â€twitter.com/i/web/status/1â€¦2l
cnni