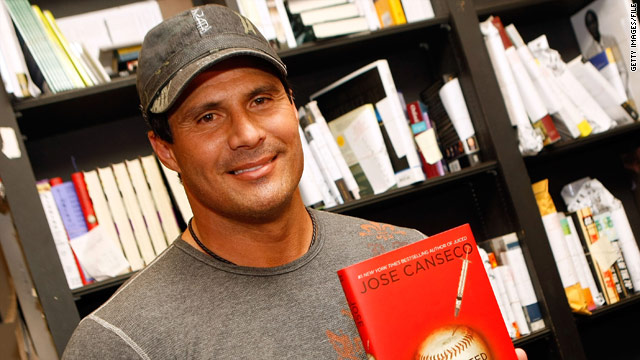 Considered the face of Major League Baseball's "era of steroid abuse," the former slugger will be named today as player-manager for the Yuma (Arizona) Scorpions, a minor league team with the North American League, the Yuma Sun reports.

"I think it's exciting for Yuma," league President Kevin Outcalt said. "It's going to be a lot of fun. Jose is a very accomplished player, he has a lot of sway in the media and in pop culture, and he's bringing that to the city. It will be a good team and a fun time at Desert Sun Stadium for the fans."

Canseco hit 462 home runs in a 17-year major-league career with the Oakland A's and several other teams. His 2005 book "Juiced" blew the lid off the use of performance-enhancing drugs by pro ballplayers, including himself.

Canseco's twin brother, Ozzie, who played just a handful of games in the major leagues, will also play and coach for the Scorpions.

The "Last Don" of the New York Bonanno crime family broke the code of silence Tuesday in a Manhattan federal court. During his testimony, Massino became "the first mob boss in history to turn stoolie," the New York Post wrote.

Massino was arrested in 2004 and is now in prison. He revealed that he became an FBI informant to avoid the death penalty and to protect his wife from prosecution.

Massino then identified Vincent Basciano as his hand-picked successor, confirming that Basciano ordered the killing of an associate.

Massino also detailed his own history with organized crime, which began when he was 12; his own recruitment in the 1970s by a former Bonanno mob boss; and how he personally led the Bonannos through scandals that included the "Donnie Brasco" FBI sting and the "Three Captains" murders. Massino continues his testimony today.

The former Richard Nixon aide, "Mad Men" ad exec and Wall Street billionaire has spent 30 years speaking out about the country's debt and dependence on entitlement programs. He's written books, given speeches and even donated a billion of his own dollars to fund a foundation to solve the problem. So what does the 84-year-old "godfather of our nation's finances" think of the Tea Party? "I don't know much about them," he recently told The New York Times.

A huge statue of Jesus Christ is under construction in southern Brazil, and it will be even taller than its famousâ€twitter.com/i/web/status/1â€¦QC
cnni

1:00 pm ET April 13, 2021 RETWEET
Our solar system boasts a diverse range of planets, but some of them may share a common phenomenon with Earth: rainâ€twitter.com/i/web/status/1â€¦QG
cnni

12:44 pm ET April 13, 2021 RETWEET
@donie Lol. We also see too much. Work way too much. And are under too much pressure. But itâ€™s the work I chose ovetwitter.com/i/web/status/1â€¦jOxb
sarasidnerCNN

12:33 pm ET April 13, 2021 RETWEET
Despite a tumultuous period on and off the pitch, Barcelona is now the most valuable soccer club in the world, accoâ€twitter.com/i/web/status/1â€¦w7
cnni