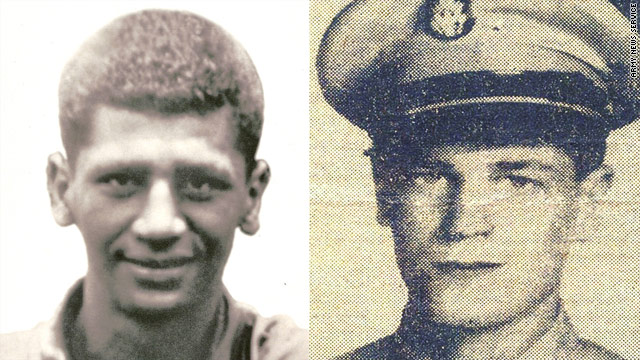 Pfc. Anthony T. Kaho’ohanohano, left, and Pfc. Henry Svehla are being honored for their actions during the Korean War.
April 14th, 2011
11:22 AM ET

Two U.S. soldiers will receive posthumous Medals of Honor for their actions during the Korean War, the White House announced Wednesday.

Relatives of Pfc. Anthony T. Kaho’ohanohano and Pfc. Henry Svehla will receive the medals from President Barack Obama at a White House ceremony on May 2.

Kaho’ohanohano is being commended for his actions on September 1, 1951. As his unit, Company H, 17th Infantry Regiment, 7th Infantry Division, fell back under superior enemy numbers near Chopra-Ri, Kaho’ohanohano ordered his squad to move to a more defensible position and provide covering fire for the retreating forces, according to a White House news release.

"He then gathered a supply of grenades and ammunition and returned to his original position to face the enemy alone - delivering deadly accurate fire into the ranks of the onrushing enemy. When his ammunition was depleted, he engaged the enemy in hand-to-hand combat until he was killed. His heroic stand so inspired his comrades that they launched a counterattack that completely repulsed the enemy," the release reads.

“His last words were ‘I’ve got your back,' and he went out and did his job,” his younger brother David Kaho’ohanohano, 77, of Hawaii told Stars and Stripes. “Nowadays, you don’t have too many heroes, and he was one of the big heroes in our family.”

Svehla is being honored for his actions on June 12, 1952, while he was a rifleman with Company F, 32d Infantry Regiment, 7th Infantry Division near Pyongony, Korea.

"Coming under heavy fire and with his platoon's attack beginning to falter, Private First Class Svehla leapt to his feet and charged the enemy positions, firing his weapon and throwing grenades as he advanced. Disregarding his own safety, he destroyed enemy positions and inflicted heavy casualties. When an enemy grenade landed among a group of his comrades, without hesitation and undoubtedly aware of the extreme danger, he threw himself on the grenade" and was killed, according to the White House release.

Svehla's sisters, Dorothy Mathews and Sylvia Svehla, will receive the medal from Obama.