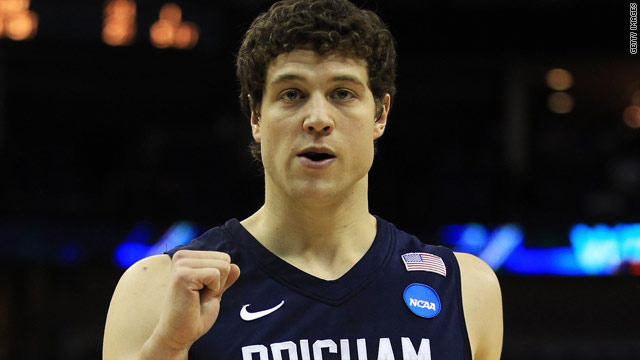 Did Jimmer become too popular for class?

College basketball standout and BYU senior Jimmer Fredette certainly has star power, collecting player-of-the-year awards after leading the nation in scoring this past season. And if his father is to be believed, he became too popular on his own campus to attend class.

Al Fredette, Jimmer's father, told the Glens Falls (New York) Post-Star that Jimmer (pictured) resorted to doing all his Brigham Young University schoolwork online because requests for autographs and photographs were getting out of hand.

"It was getting too disruptive," Al Fredette said, according to the Post-Star. "He can't go anywhere in Provo (Utah) without being recognized."

As the report notes, missing class wouldn't be unusual for a NBA-bound player after the college season ends, and working outside of class isn't odd for any well-traveled collegiate athlete. But the elder Fredette said the school asked Jimmer to stop appearing in class, according to the paper.

Jenkins said whether Jimmer Fredette - an American studies major - attended class was worked out with individual professors, and not decided by the school.

"He's been working with individual professors on a class-by-class basis," which may involve getting materials online. Jenkins said he doesn't know whether he stopped attending classes because his presence was disruptive.

BYU student Nathan Gundlach told CNN affiliate KSTU that Fredette hasn’t been in one of his friend’s classes in a couple of weeks.  BYU’s season ended in late March when it lost to Florida in the NCAA tournament’s round of 16.

In any event, Fredette and the rest of the basketball team were on campus Tuesday for a student-run end-of-semester assembly, Jenkins said. Classes ended Wednesday, and finals are next.

Fredette, who led the nation in scoring this year with nearly 28 points per game heading into the postseason, was in Los Angeles on Friday, picking up the John R. Wooden Award as college basketball's player of the year.