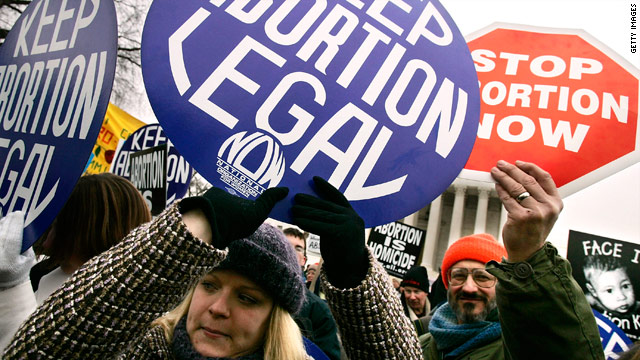 "Even with the best birth control, women become inadvertently pregnant. Pro-lifers will tell that young woman she must have that baby, then ignore the suffering of the unwanted child who lives in abject poverty for life. I wonder how many conservatives have spoken out against a national health care system to provide medical care for the children of single mothers."–Aginghippy

pfriedkin said, "The push for these laws are purely the work of Christian extremists. Their "social" agenda is really a religious agenda and an attempt for force everyone to do what they say." Jilli asked, "Can burkhas be far behind?"

AngryDeuce said, "This is why churches should not get tax-free status: the money they claim is going to help the needy is going to lobbyist groups and perverting our political system with their beliefs. You want tax-exempt status, you show me the soup kitchen or homeless shelter it is funding. One penny goes to politics, and you lose your tax-free card for 5 years. That's how it ought to be."

Many questioned why states would withhold funding for abortions when society might have to pay for the future problems that might cause.  casselli said, "Is the GOP going to support all of these unwanted babies? What is going to happen when some of these women that will not take care of these babies start having them instead of having that procedure?"

Guest said, "I'd rather my tax money pay for an abortion than for the child's maintenance for 21 years."

Thrillhouse said, "Legalized and accessible abortion has shown a strong correlation with reduced crime rates. Right or wrong, there are very real consequences of forcing individuals to have unwanted children."

Nearly 20 years ago, 76 followers of self-proclaimed prophet David Koresh lost their lives during an FBI raid. The group was stockpiling machine guns and Koresh had engaged in sexual acts with underage Davidian girls, according to many sources. Some survivors still await Koresh’s return.

ZooperDoink said, "America's not a melting pot, it's a cereal bowl. Full of nuts, fruits, and flakes."

MarkDudier said, "He was more like a pedophile with a Jesus complex."

s33k3r75 said, "As crazy as this is, people have a fundamental right to join a cult and believe what they want. But no one has a right to rape underage kids or send their kids to be raped by the cult leader."

SadPanda said, "Have you ever noticed that the common denominator in cults and the like is that the leader gets to have sex with all the women? It's never about finding God or anything else, it's just so the main guy can fulfill some weird fantasies he never got to experience living in his mom's basement."

flippin said, "It's so sad how some are so easily brainwashed. And it's scary that someone like Koresh can so easily convince so many that he is God. He was a space cadet, a hypocrite, a sleeze, a liar, a pedophile, a thief, a murderer. Yet all these people were convinced he was God in the flesh. So much that they let their children be abused, suffer, and ultimately be killed in a fire."

Pleo said, "Given the enormity of the tragedy, and the loss of loved ones, it's easier for some of these people to believe they were right and their loved ones "died for Jesus,” than it is for them to accept the truth that they were duped by a charismatic cult leader. Very sad story."

tadam74811 said, "Koresh was as insane as Charles Manson, and unfortunately his followers were blinded by the craziness that sometimes accompanies religious fervor."

iRichard said, "Jim Jones, Terry Jones, Westboro, and Islamic extremists are all examples of the danger of radical religion. Our forefathers certainly knew what they were doing when they separated church and state."

Zsa Zsa Gabor’s husband, Prince Frederic von Anhalt, wants to have a child “with” his 94-year old wife, using a donated egg, surrogate mother, and artificial insemination. lienn said, "Please tell me this is a joke!!!" CosMcOldGuy said, "Madness! Leave the poor old lady alone. She had a great run."

TheSwan1213 said, "A 67-year-old man (adopted as an adult to become a prince) wants to have a child with a 94-year-old one-legged bed-bound former actress? These people are nuts!!"

tovia said, "If his plan is for all three of them to wear diapers at the same time, then his timing is impeccable."

citizenUSA said, "So baby's first outing will be her mother's funeral."

AndyDaniel said, "I would bet that Zsa Zsa Gabor is not even aware of this statement by her husband, who in the past has done several bizarre things for publicity, including claiming to be the father or Anna Nicole Smith's baby, and claiming he was robbed and handcuffed naked to his car by a group of women. This will go exactly nowhere."

After expressing shock, many CNN.com readers began to speculate about the real purpose for pursuing paternity.

rebeyeh said, "So, technically it wouldn't be Zsa Zsa's natural offspring if they're using an egg donor and his sperm. She already has an heir, her daughter; this guy is afraid he won't get a penny when she dies."

kowalski66 said, "He is pretty shrewd, if you ask me! He is worried about the inheritance, and a baby with his seed will help seal the deal." TNopinion agreed, "I guess he's thinking if they have a joint child together, said child will inherit half the fortune and he will claim it by proxy."

LordPet said, "I suppose it's a way to make it harder for Francesca Hilton to contest the will." sD1 said, "Sounds like her daughter needs to be visiting a lawyer on Zsa-Zsa's behalf and soon."