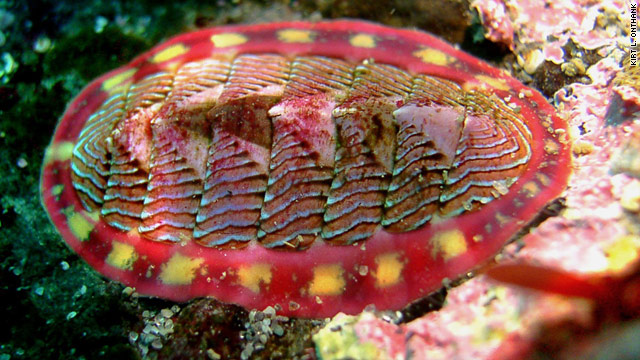 A lined chiton near Whidbey Island, Washington, was photographed about 50 feet below the surface.
April 15th, 2011
08:30 AM ET

Mollusks watch with eyes of rock

In the past month, we've seen eagle rays and mako sharks jumping aboard boats. Now it turns out mollusks may be watching us ... with eyes made of rock.

Daniel Speiser, a researcher at the University of California, Santa Barbara, collected chitons, 3-inch-long mollusks, from the Florida Keys and gave them vision tests during his graduate studies at Duke University in North Carolina.

Scientists had long known that chitons had primitive eyes, but it was thought they could only detect changes in light.

"Turns out they can see objects, though probably not well," Speiser said in a news release from the Santa Barbara school.

"Not well" means their vision is about 1,000 times weaker than that of humans, said S√∂nke Johnsen, associate professor of biology at Duke, who cooperated with Speiser in the research.

Still, that vision may be something to marvel at because¬Ýchitons' eyes have lenses made¬Ýof aragonite, a type of rock. According to the researchers, the chiton is the first creature found to have eyes not made of calcite.

Making lenses of aragonite may have been easy for the mollusks as their shells are made of the same material. And Speiser says the chitons likely evolved with eyes so they can spot predators.

While the chitons don't¬Ý have 20/20 vision, they do have a lot of eyes. Hundreds of the lenses cover their eight-sectioned shells, with light-sensitive clusters under each lens.

The study is published in Current Biology.

A fifth of the world‚Äôs 7,000 languages will be dormant or dead by the end of the century. Entire cultures are dyingtwitter.com/i/web/status/1‚Ä¶IasU
cnni

4:01 am ET April 17, 2021 RETWEET
Doctors say many young people are suffering coronavirus complications they didn't expect. And it's time to ditch th‚Ätwitter.com/i/web/status/1‚Ä¶Nf
cnni

2:01 am ET April 17, 2021 RETWEET
The US Defense Department has confirmed that leaked photos and video of "unidentified aerial phenomena" taken in 20‚Ätwitter.com/i/web/status/1‚Ä¶Bz
cnni