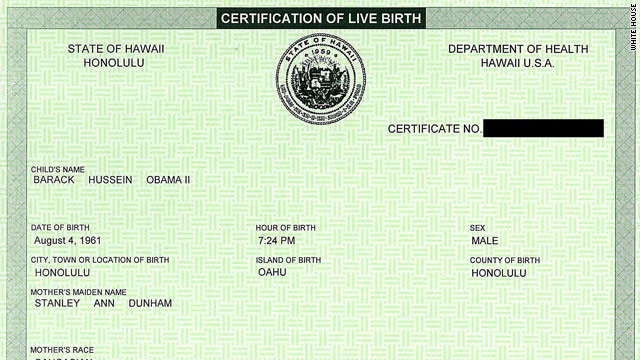 Exchange of the Day: "All Obama has to do to make this all go away is produce a birth certificate. It shouldn't be that tough. Why hasn't he?"– TRoublerunt

"The Health Department of the State of Hawaii (and then Republican governor) certified that he was born there. What exactly do you want as proof? The long-form birth certificate that Hawaii and several other states don't issue?"– LivinginVA

Federal law requires that presidential candidates be natural-born American citizens. For Arizona legislators, however, this is not enough. They have passed a bill requiring that all presidential candidates - including President Obama - prove their citizenship before they are placed on that state's ballot. The measure has not yet been signed by Arizona Gov. Jan Brewer, a Republican. Many CNN.com readers said the bill was really about racism.

Suhgarim said, "The only politician I've ever seen proof of being born in the US is Barack Obama; perhaps we should kick all the others out until they can prove where they were born. I am white and I am sick, sick, sick of this racism! Because that's just what it is. I've never seen a white candidate go through this. A plague and a curse on America for our stupidity! And a double plague and curse on conservatives and Republicans!"

kathyrants said, "In my entire lifetime, I have never known of a president who had to go through so much just to prove he is eligible for the presidency. I have also not seen so much disrespect for the president. Let's get with it America. Let's worry about more important things. Let our President do what he needs to do to get us back on track. I too am white and very tired of hearing about this. He is black; he is the president, so shut up, sit down and have another beer!"

Some readers questioned the use of taxpayer money to push the bill. Ghurst said, "So why did Carl Seel introduce a bill for a law that already exists? As a public servant, shouldn't he be mindful of how he spends his time and the people's money? If my boss caught me wasting my time and his money on something that is not needed, I would get fired."

BigOtto said, "We have truly become the laughing stock of the world."

Muslim beauty contestant faces critics on all sides, she says

Model Shanna Bukhari hopes to win the British Miss Universe contest this year and represent Britain at the international contest. Her presence in the beauty contest has upset all kinds of people: among them, some Muslims who think she is not religious enough andÂ some U.K. citizens who think she shouldn't be allowed to represent a "white" country.

The story had some CNN.com readers discussing how Islam views women.Â  Alberto said, "As a Muslim, I say to Shanna: All the power to you, girl! Go for it. Don't let the idiots get to you. You are beautiful, created by the same God that has created this universe. There is no place for religious zealots to have a say in what you're doing, only you and your heart.â€ť

fgf said, "Ignore these stupid people, Shanna. I'm a Muslim girl - do whatever you want. Those laws to cover up had cultural relevance in Saudi Arabia 1400+ years ago. They donâ€™t apply today."

Husain said, "Allah did not want women to be our equals. Women are inherently inferior and subservient to men. They must be covered to keep them from entering into sin and causing a man to do so. They are put here to bring forth children and give pleasure to their husbands."

Billy Ryan replied, "Husain, You must come into the light. Women are equals in every way, Don't be left behind in another century, Join ours. It's much better."

KBaus said, "Husain, what does the Quran say about family and the mother? Does it say that family is at the feet of the mother? Does not it say to treat your mother with the highest respect? Saying that women are inherently inferior clearly states that your mother is inferior to you. That is not what Quran say. How is it that Jesus is one of the four most important prophets of Islam yet he taught peace and love, not hate and inequality? Are you a true Muslim or one who hijacks Islam for its own evil purpose?"

BiH said, "Dear Husain, as a Muslim women, I have the privilege to believe and practice the religion of Islam. I support the young lady; she is proving that women in Islam are equal to any other women in other religions. Now is the time for Muslim men to start respecting your sisters, wife, daughters. How many Muslim women are suffering because of the egoism of man? Donâ€™t anyone dare to judge the women; we will all one day be standing in front of our creator, Inshallah."

'All My Children,' 'One Life to Live' canceled

For more than 40 years, TV viewers have been able to tune in to the much-loved life stories portrayed on "All My Children" and "One Life to Live." By January 2012 those stories will end, ABC announced, to be replaced with shows about food and lifestyle.

Many CNN.com readers shared how tuning in to those shows powerfully linked them to memories of loved ones. Kelly said, "I grew up watching 'All My Children' with my grandmother. I still watch till this day and I'm also hooked on OLTL and GH. These shows are as American as apple pie."

Tamzilla said, "One of my fondest memories is watching AMC with my mom over dinner! I bought my first VCR just to record AMC. Now that I'm disabled I DVR them both everyday. If they do away with both these I will never watch ABC again!"

Jerbear said, "This is a sad day. I am a 35-year old male (not gay) who watched OLTL/General Hospital religiously when I was young every day with my grandma. I became hooked. I still tune in if I have the chance, just for the nostalgia."

Others explained how the shows relieved the stress in their own lives and swore they would turn off ABC forever.Â  Sherry said, "Everyday I drive home for lunch just so I can watch 'All My Children,' and have had this same routine for the past 11 years. At least for an hour a day I was able to get lost in somebody else's world and leave my problems behind. I definitely will not be watching a food reality show. ABC has lost this viewer."

But others said the soaps had lived past their prime. When Andagain said, "Oh no! I stopped watching AMC 25 years ago when I had to go to work. Whatever happened to Erica Kane?!!" John replied, "You're wondering why they're canceling these shows? For one, even you stopped watching a quarter-century ago."

A team of World Health Organization investigators is preparing to leave quarantine in the Chinese city of Wuhan andâ€twitter.com/i/web/status/1â€¦xZ
cnni

3:00 am ET January 27, 2021 RETWEET
"President Joe Biden's pledge that there will be sufficient vaccines for 300 million Americans by the end of summerâ€twitter.com/i/web/status/1â€¦Lu
cnni

2:46 am ET January 27, 2021 RETWEET
Seoul's former mayor died last year in an apparent suicide after his secretary accused him of sexual harassment.â€twitter.com/i/web/status/1â€¦ip
cnni