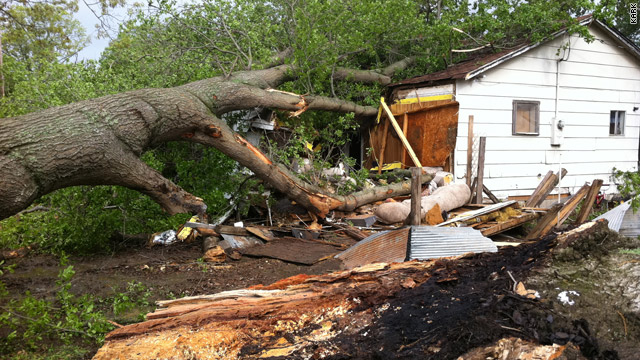 [9:47 p.m. ET, 8:47 CT] Alabama Gov. Robert Bentley has declared a state of emergency for all counties as a result of severe weather. Tornadoes were reported Friday near Livingston, near Melvin, and near Linden.

[5:55 p.m. ET]Â A tornado watch has been issued by the National Weather Service for western and norther Georgia, including the metro Atlanta area, until 12 a.m. Saturday.Â  Hail up to 2 inches in diameter and wind gusts up to 70 mph are possible, forecasters say.

[2:48 p.m. ET, 1:48 p.m. CT] A tornado emergency has been issued for towns of Geiger, Panola, New West Green, and Pleasant Ridge in Alabama. At 1:34 pm CDT, storm spotters were tracking a large and extremely dangerous tornado that was mile wide, the National Weather Service said. The tornado was located 23 miles northwest of Livingston moving east at 45 mph.

[1:24 p.m. ET, 12:24 p.m. CT] A tornado has touched down southeast of Linden, Alabama, the National Weather Service said. Tornadoes have also been reported in Melvin, Alabama, and in or near the cities of Loper, Madden, Mt. Sterling, Ludlow, Clinton and Jackson in Mississippi, according to authorities.

[12:49 p.m. ET, 11:49 a.m. CT] A tornado touched down near State Line, Mississippi, at 11:45 am CDT on Friday morning. The tornado was reported by emergency management officials, the National Weather Service said. There are no reports of injuries or damage at this time.

[12:44 p.m. ET, 11:44 a.m. CT] A 34-year-old woman and a 7-year-old child have been discovered dead inside a Little Rock, Arkansas, home after being struck by a falling tree during severe storms Thursday, the state Department of Emergency Management confirmed. The deaths bring to nine the number of people killed by storms in Arkansas and Oklahoma Thursday.

12:00 pm ET October 22, 2021 RETWEET
Smoke from wildfires impacts far more people east of the Rocky Mountains than in the West, where most large fires iâ€twitter.com/i/web/status/1â€¦QL
CNNweather

11:43 am ET October 22, 2021 RETWEET
The film industry has been left shocked and in mourning after cinematographer Halyna Hutchins was killed on set wheâ€twitter.com/i/web/status/1â€¦L7
cnni