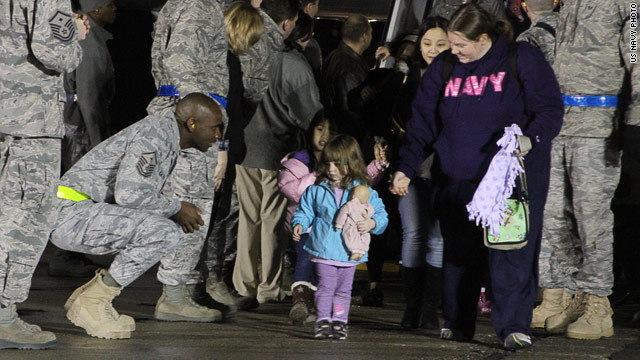 The U.S. State Department is lifting the voluntary departure order issued for dependents of U.S. government employees in Japan, allowing families to return to the country.

The departures were authorized after the March 11 earthquake and tsunami damaged the Fukushima Daiichi nuclear facility and led to releases of radiation from damaged nuclear reactors.

In a travel alert posted on its website, the U.S. Embassy in Tokyo said that while the situation at the Fukushima nuclear facility "remains serious and dynamic," the radiation dangers outside a 50-mile radius evacuation zone are low and "do not pose significant risks to U.S. citizens."

"Based on the much reduced rate of heat generation in the reactor fuel after one month of cooling and the corresponding decay of short-lived radioactive isotopes, even in the event of an unexpected disruption at the Fukushima Daiichi plant, harmful exposures to people beyond the 50-mile evacuation zone are highly unlikely," the embassy statement said.

Travel inside the evacuation zone is still not recommended. Major U.S. government and military facilities are outside the 50-mile zone.

The families of military personnel who left Japan for "safe havens" in the U.S. are awaiting Pentagon orders authorizing their return, Stars and Stripes reported.

â€śFamily members will soon receive instructions on how to obtain return flights and proceed from their selected locations,â€ť Stripes quotes a statement from U.S. Forces Japan as saying.

The U.S. Embassy statement said theÂ American government is using the same safety standard in allowing the return of dependents as it would if such an event occurred in the United States.

The EU is calling out vaccine makers AstraZeneca and Pfizer over delivery delays that could slow its recovery fromâ€twitter.com/i/web/status/1â€¦8l
cnni

9:31 am ET January 26, 2021 RETWEET
While oil-rich Gulf Arab nations were among the first in the world to receive a vaccine, war-torn countries such asâ€twitter.com/i/web/status/1â€¦3m
cnni

9:15 am ET January 26, 2021 RETWEET
RT @NewDay: Chinese journalists were early to report on the coronavirus outbreak and briefly, it seemed to be without the usual censorship,â€¦
cnni

9:12 am ET January 26, 2021 RETWEET
A court in India has ruled that groping a child through their clothing does not constitute sexual assault, drawingâ€twitter.com/i/web/status/1â€¦mN
cnni

9:00 am ET January 26, 2021 RETWEET
đź“© Sign up to get the facts on coronavirus delivered to your inbox dailcnn.it/3sZhU8DL3d Here's everythintwitter.com/i/web/status/1â€¦z8a2Y
cnni