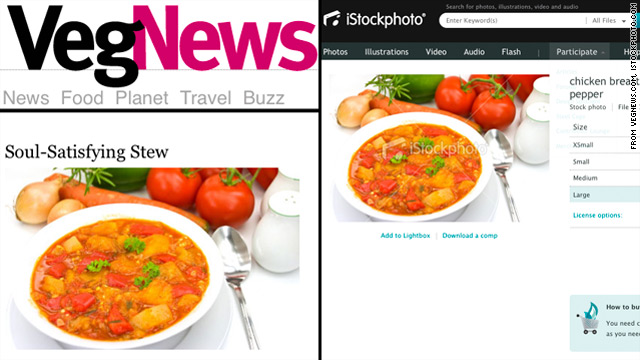 "As a privately owned publication with no outside funding, VegNews has done the near impossible by lasting 11 years and securing prime real estate in bookstores across the country. Currently, the popular magazine reaches over 1 million readers each month, including herbivores and omnivores alike," wrote Michael Parrish DuDell, senior editor of Ecorazzi.com, a self-described ┬Ā"green gossip blog."

"While some online critics have suggested VegNews source user submitted photos, anybody whoŌĆÖs ever worked in publishing knows this suggestion isn't logistically possible. With time-sensitive deadlines, detailed specs, and other provisions to consider, sourcing photos would be more trouble than it's worth. Ideally, VegNews would have an in-house photographer, but being an independently owned company on a conservative budget prohibits that option. These are only some of the challenges the outspoken naysayers don't seem to be considering."

"Hurting VegNews over this would be sad and would mean the loss of an important resource and a way for vegans to reach out to their own kind as well as people who are NOT vegan but interested in veganism...It would be an unfortunate take-down of one of the vegan communityŌĆÖs greatest accomplishments by their own people and I just donŌĆÖt think thatŌĆÖs what being vegan should be about."