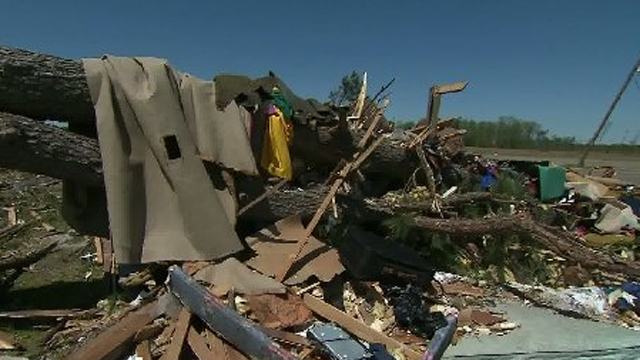 Fast-moving storms ripped through the Southeast over the weekend, spawning tornadoes that flattened parts of North Carolina. The storm killed at least 45 people in six states, including Virginia, Oklahoma, Alabama, Mississippi and Arkansas.

In today's Gotta Watch, we're looking at the aftermath of the devastating weather system that crippled the region.

Inside the storm – Get an inside look of the storm that killed 22 people in North Carolina and leveled parts of that state. The damage was so severe, it nearly wiped out an entire rural town.
[cnn-videoÂ url="http://www.cnn.com/video/#/video/us/2011/04/18/nc.tornado.damage.mon.cnn"%5D

Split-second decisions – When a tornado had a Lowe's hardware store in its sights, employees had little time to shepherd customers to safety. They worked quickly, saving dozensÂ of lives in the process.

Tornado tackles Mississippi – From a safe distance, a local captures video of a twister quickly making its away across a Mississippi reservoir.

3:29 am ET September 22, 2021 RETWEET
Women who have been sexually assaulted have a higher risk of developing a type of brain damage that has been linkedâ€twitter.com/i/web/status/1â€¦E0
cnni

2:31 am ET September 22, 2021 RETWEET
Two Japanese sisters have been confirmed as the world's oldest living identical twins and the oldest ever identicalâ€twitter.com/i/web/status/1â€¦p8
cnni

1:31 am ET September 22, 2021 RETWEET
27-year-old Nathan Paulin walked a 600-meter slackline from the Eiffel Tower to the other side of the Seine river iâ€twitter.com/i/web/status/1â€¦t4
cnni