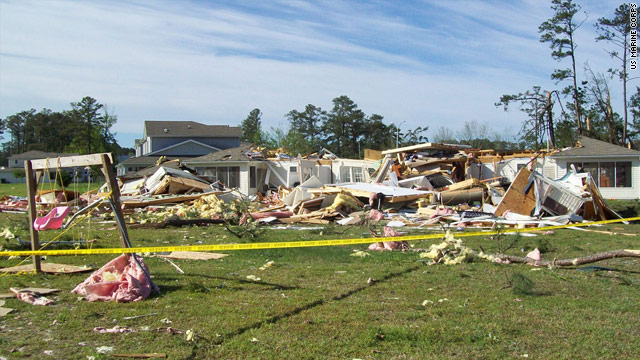 Life and death in path of tornadoes

Police in Sanford, North Carolina, are crediting the manager of a Lowe's Home Improvement store and his staff with saving the lives of dozens of people when a tornado struck Saturday afternoon.

Manager Michael Hollowell looked out the front of the store and saw the tornado approaching, CNN affiliate WRAL-TV reported. He alerted his assistants via in-store phones, and they helped get about 50 employees and as many as 60 customers to the back of the building, where walls of concrete joined to provide strength and there was no high shelving with heavy items. The dozens of people huddled shoulder to shoulder to escape the storm's fury.

"One person didn't save all those lives," WRAL quoted Hollowell as saying. "It was a team effort."

Storms that swept across the South over the weekend killed 45 people, including 22 in North Carolina, authorities said.

Among the dead were three children in one trailer home at the Stony Brook North mobile home park in Raleigh.

According to CNN affiliate WNCN-TV, police said Cristina Alvarez gathered the three children and another 6-month-old in a closet to seek shelter from the storm. But a tree fell onto the home, killing Daniel Quistian, 9, Osvaldo Coronado, 8, and Kevin Coronado, 3. Alvarez is the mother of Daniel and the baby and is believed to be the aunt of the other children, police said.

"I went to the home where the children were killed.Â It's really bad," WNCN quoted Raleigh police Maj.Â J.C. Perry as saying. "It's unlike anything I've seen before."

Of the 200 homes in the mobile park, 100 are expected to be condemned, officials told the TV station.

In Onslow County, Marines pulled a 23-month-old boy alive from the rubble of a destroyed home after the child's mother stood up from the wreckage and said her child was buried, CNN affiliate WCTI reported.

"I started looking for stuff on the ground that was, you know, items for a baby and I started getting to where I could see a lot of baby stuff and I found the crib, and when I lifted the wall up, there was the baby right there," Sgt. Gregory Shafer was quoted as saying.

Shafer and fellow Marines Sgt. Jarred Boone and Lance Cpl. Thomas Dickerson were barefoot as they searched through the debris and stepped on nails and glass during the rescue, according to the station.

"The ony thing I thought of is, what if it was my daughter?" Dickerson told WCTI. "So I didn't even think about what was going on."

The child was in critical condition at a hospital Sunday, according to WCTI.

Shaw University student Julius Stukes Jr. grabbed a video camera and gave a tour of the campus ravaged by a tornado Saturday.

In the school's William E. Gary Student Center, Stukes is stunned by the destruction.

"All of the offices are done. Oh my God, this used to be an office - it's not anymore," he says during the video provided to WNCN. "Our campus is done. The whole campus is done."

The university has suspended classes for the rest of the spring semester, the station reported.

In Ammon, North Carolina, 70 miles south of Raleigh, Milton Powell told CNN affiliate WWAY-TV that a tornado lifted his home off the ground and spun it around twice.

"It was just like a bad ride," WWAY quoted Powell as saying. "Everything outside came inside and everything inside went out. I've got two dogs missing. I found one last night and have one missing that I think might be under the trailer."

Nearby, Marchester Avery, 92, and his son, Tony Avery, 49, were killed in their mobile home.

10:00 pm ET August 16, 2022 RETWEET
A number of rockets struck near a military base in northeastern Syria housing US troops but did not cause any injurâ€twitter.com/i/web/status/1â€¦51
cnni

10:00 pm ET August 16, 2022 RETWEET
A number of rockets struck near a military base in northeastern Syria housing US troops but did not cause any injurâ€twitter.com/i/web/status/1â€¦51
cnni