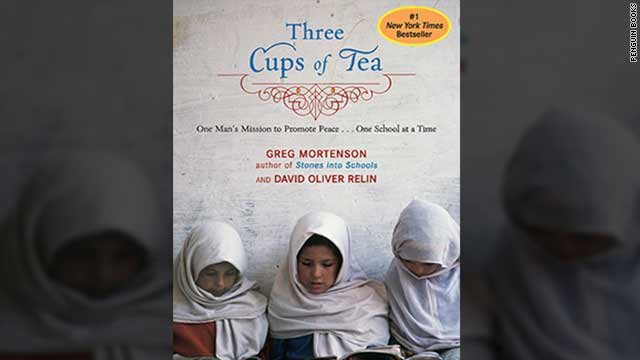 Overheard on CNN.com: Tea and controversy

"I loved 'Three Cups of Tea.' It made me feel good about donating to charities. However, finding out that the author (may have) lied was like eating half of a delicious chocolate cupcake and finding a booger in the other half. I’m a lot less trusting after this experience." - allmosttoast

The author of the best-selling book "Three Cups of Tea: One Man's Mission to Fight Terrorism and Build Nations ... One School at a Time," is facing  accusations that key sections of the story aren't true. Critics also are questioning how money Greg Mortenson's foundation raised to build schools for girls in Afghanistan and Pakistan is being spent.

Some CNN.com readers, like allmosttoast, felt let down by the reports, while others defended Mortenson and dismissed the allegations as gossip.

hillbilleter said,  "Now you're passing judgment that is ruining a man's life, all based on unsubstantiated gossip from a competing author, and feeling pretty virtuous about it, too, aren't you?"

oddjob3422 said, "He's lying through his teeth, claiming to have built schools that don't exist, etc. Sure, SOME of the money he's collected has gone to help, but that's why you rate charities. Just because he spent some of the money there doesn't excuse rampant dishonesty and fraud. He came out today with a response that essentially goes for the scare mongering that getting the truth out of him will harm school children in those countries. How completely classless."

MannyHMo said, "Believe but verify ! Mr. Mortenson should explain and publish his expenses publicly. Never mind his stories and attempts to make himself superman. Just follow the $$$ he received. I'm sure the FBI and IRS know how to do that."

ScreenName71 said, "Great, the Taliban must be laughing with glee. Anyone else going to go educate girls? Nice move, (critic Jon) Krakauer. You've done the work of the Taliban."
decora responded by asking, "So, telling the truth makes one an ally of the Terrorists. Wow, that's - what country do i live in again? "

TimGreer said, "How difficult is it to stay awake for such an important job? I never got people that just fall asleep, even if you're (tired). People that fall alseep working, doing things, or often worse, driving, unless you have a health problem, it's just stupid or lazy. Promptly replace these people with someone else that will do the job. It's simple."

erich2112x said, "The problem here is so obvious: Their schedules are completely whacked. They get off work and have to be back in 8 hours. Why can't these guys work regular hours? seems to me like they need a change in tradition and culture rather than 1 extra hour of sleep."

PeaceofWar said, "You want to stop this gross negligence? Start by charging a sleeping controller with a crime for endangering human lives. If a train engineer, or subway/bus driver, or truck driver, fell asleep they would be criminally charged, so why should an air traffic controller be treated different? If anything they should be treated more severely since the potential for harm is so much greater. "

goinmad2009 called it a "classic case."
Manager: "I need a baby in one month, here's 9 women. Now go get it done."
This is why they need a education in organizational behavior and human resource management. Painful to see people like this thinking that its only the people who are to blame."

Make Charles king for a day

The upcoming wedding of Britain's Prince William and Kate Middleton is focusing lots of attention on the royal family, and the future king of England. CNN contributor Bob Greene says William's father, Prince Charles, isn't getting any younger, but shouldn't be passed over for the throne. CNN.com readers had mixed feelings on the idea.

TreeTop said, "As people live longer, of course the monarch is going to have to wait longer to take the throne. I don't think it bothers him. It's not like he doesn't have plenty of engagements and responsibilities to keep him busy. He will be king one day, he just won't be a young king."

SarahB12345 said, "What a ridiculous waste of type. Who cares who becomes king of England? The British royal family are the world's most successful welfare recipients, and what do they do? Suck up gin and shoot grouse. Whoopeee. "King" is a ceremonial role with no real power. So make my Yorkshire Terrier king of England. He's cute, personable, and housebroken. I'm sure he'd do a bang-up job."

FlowinEddie said, "Better idea here: Make him a peasant peon for a year so he can see how the other half live. Maybe he'll lose some of his stuffiness."

Miraflores said, "I've been waiting for Prince Charles to become King as long as he has. He has a resume that is fit for a King, and someday his son will, too, but he hasn't got it yet. Queen Elizabeth would do well to retire, and then watch her son take over the job he was meant for. As a mother I think it would be a top achievement of her life time.