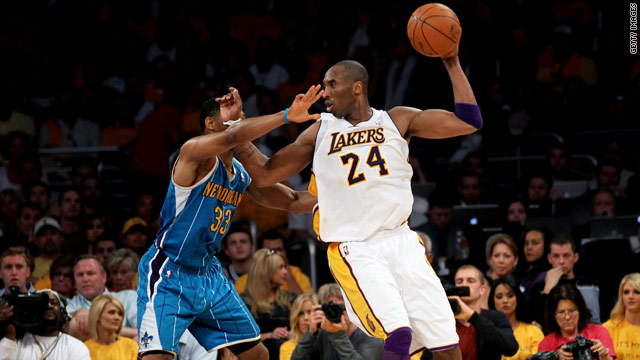 A 109-100 loss to the Hornets? Not exactly how the two-time defending champion L.A. Lakers were hoping to kick off their quest for another national title. But that's precisely where the team finds itself, one game down and facing the explosiveness of point guard Chris Paul, who racked up 33 points and 14 assists during a shocking Game 1 in the Western Conference.

As SI.com's Lee Jenkins explains, despite having a relatively lackluster season and going 0-4 against the Lakers, the Hornets blasted past a defense incapable of shutting down Paul. "He sandbagged the sandbaggers with a combination of crossovers, floaters and step-back jumpers that left the Lakers wondering who they had spent the past three days watching on film," Jenkins writes. "This was Paul, circa 2008, when he led the Hornets to 56 wins and ran figure-eights around the Mavericks in the first round."

While the Lakers acknowledged that Paul had the ability to dominate in at least one game of the series, the fact that Los Angeles saw their expected Game 1 win go up in a 41 minute blaze of Paul shooting was, well, surprising.

But the question pressing forward will be if the Hornets and, more specifically, high-scoring Paul, can keep up the performance that they showed Sunday at the Staples Center. If the Lakers are lucky, the answer will be no. NBA playoff action continues tonight.

Philadelphia 76ers vs. Miami Heat (7 p.m., ET) - "Will he or won't he?" is the question when it comes to Dwyane Wade and whether he'll join fellow Heat players when the team faces off against the 76ers tonight.

Indiana Pacers vs. Chicago Bulls (9:30 p.m., ET) The Pacers may have fallen 104-99 to the Bulls, but their performance definitely showed that the team is one to reckon with in Game 2.

41 - Number of points scored by Kevin Durant in the Hornets upset of the Denver Nuggets Sunday night.

.002 - The official margin in seconds that Jimmie Johnson took the Talladega checkers over Clint Bowyer. It ties the closest finish since NASCAR went to electronic timing. Brant James recaps the race.

115 - Number of times the Boston Marathon has been run. The historic race kicks off today.

ŌĆ£The Lord of the Rings: The Rings of PowerŌĆØ will be released on Amazon Prime in early Septemcnn.it/3tHSEXEAnpT
cnni

3:00 pm ET January 19, 2022 RETWEET
Inside sled dog racing, the forgotten Olympic sport "You suddenly find yourself getting wrapped around a tree, andŌĆtwitter.com/i/web/status/1ŌĆ”Sh
cnni

2:30 pm ET January 19, 2022 RETWEET
The President of Emirates tells CNN that the airline was not aware of some of the potential 5G rollout issues untilŌĆtwitter.com/i/web/status/1ŌĆ”wH
cnni