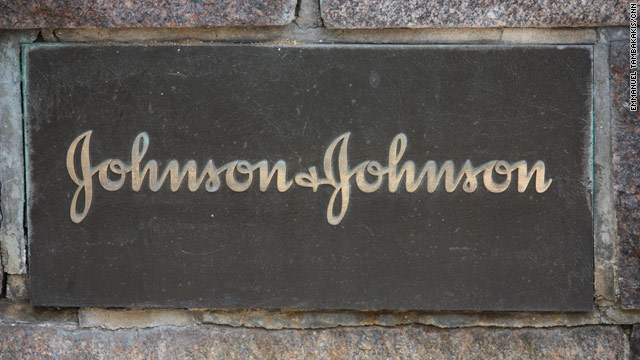 "The market continues to focus more broadly on earnings, which so far this season have been mixed," said Peter Cardillo, chief market economist with Avalon Partners.

Johnson & Johnson was the top performer on the Dow, with shares rising more than 3%, after the company reported better-than-expected sales and earnings. Alcoa, Caterpillar and DuPont were other big gainers.

Traveler's was the biggest drag on the blue-chip index, falling more than 1.4%.

Gold prices topped a record $1,500 for the first time on Tuesday, shattering an important psychological barrier as investors seek out investments thought to be safe during times of upheaval.

Many investors see gold as the best place to park their money when there's economic or policital uncertainty, and there has been plenty of that to go around.

The price spike also comes against the backdrop of market uncertainty that has sent investors looking for an alternative to the weak U.S. dollar. And gold has been the marquee beneficiary.

On Monday, it was a dour outlook on U.S. debt that sent gold prices higher.Â Standard & Poor's lowered its outlook for America's long-term debt to "negative" from "stable," based on uncertainty surrounding the nation's fiscal problems.

In 2010, chief executives at some of the nation's largest companies earned an average of $11.4 million in total pay - 343 times more than a typical American worker, according to the AFL-CIO.

"Despite the collapse of the financial market at the hands of executives less than 3 years ago, the disparity between CEO and workers' pay has continued to grow to levels that are simply stunning," said Richard Trumka, AFL-CIO president.

In an effort to shine a light on CEO pay, the AFL-CIO examined chief executive salaries at 299 firms traded on the S&P 500. Their compensation was up 23% in 2010, compared to 2009. AFL-CIO used Bureau of Labor Statistics wage data to define typical worker pay, which was $33,190 for all occupations in 2009, the most recent year for which data is available.

That and more data is posted on the website paywatch.org, which is run by the union group. The site will eventually post CEO pay for all 500 companies, as that data is released in proxies submitted to the Securities and Exchange Commission (SEC).

A German couple has set the world record for the most decorated Christmas trees in one place. Months of preparationâ€twitter.com/i/web/status/1â€¦5D
cnni

5:27 pm ET December 8, 2021 RETWEET
Of all the things I thought I would need to watch out for in Chicago â€¦.A bison is not one@StephanieElamam needs totwitter.com/i/web/status/1â€¦wsIm
sarasidnerCNN

5:07 pm ET December 8, 2021 RETWEET
The entire world remains unprepared for the next pandemic and most countries are underprepared even for small outbrâ€twitter.com/i/web/status/1â€¦OS
cnni