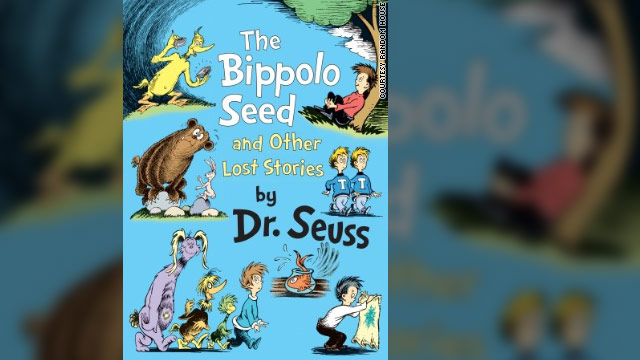 We'll stop there. You get the idea.

"The Bippolo Seed and Other Lost Stories by Dr. Seuss" will hit store shelves in September, according to publisher Random House Inc.

The seven stories have been published before, but never in book form. They appeared in magazines in 1950 and 1951, the publisher says.

Seuss scholar Charles D. Cohen tracked down the stories, whose fantastical illustrations will have more vibrant colors in the book than were possible in the 1950s magazines, according to Random House.

The seven stories are:

- "The Bear, the Rabbit, and the Zinniga-Zanniga " (about how a rabbit fends off a bear with an unusual weapon)

- "Gustav the Goldfish" (an early, rhymed version of "A Fish Out of Water," written by Seuss' wife, Helen Palmer, and illustrated by P.D. Eastman)

-"Tadd and Todd" (a tale relating to twins and photocopies)

-"The Great Henry McBride" (about a boy with extraordinary career dreams)

Dr. Seuss, whose real name was Theodor Geisel, died in 1991. He published 44 children's books, even though the first one, "And to Think That I Saw It on Mulberry Street," was rejected by publishers 27 times, according to the website of the Dr. Seuss National Memorial in Springfield, Massachusetts.

A confused Waymo self-driving car was captured on video as it became stranded on an Arizona road earlier this month‚Ätwitter.com/i/web/status/1‚Ä¶bh
cnni

7:23 pm ET May 17, 2021 RETWEET
US President Biden expressed support for a ceasefire as intensifying violence between Israel and Hamas militants in‚Ätwitter.com/i/web/status/1‚Ä¶mU
cnni