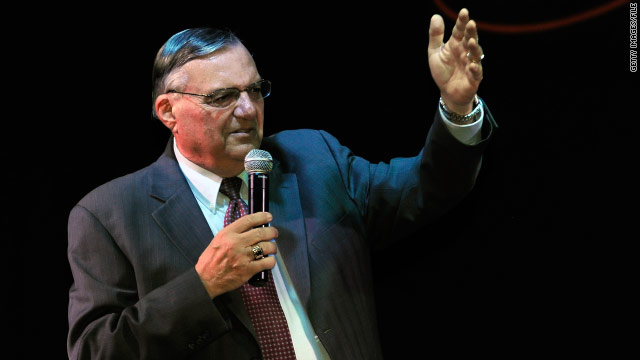 The Arizona law enforcement official known as "America's toughest sheriff" has come up with a new way to demonstrate his authority.

Maricopa County Sheriff Joe Arpaio has begun posting online mug shots of people who are arrested, asking people to vote for the photo they find most amusing. He says that putting the mug shots online and inviting a mass audience to view them is a way to drum up leads for investigations. "I want people to turn to see if their neighbor's been arrested," he said.

Some people have said it's unfair, arguing that not everyone arrested is guilty and that putting the images online in that forum, to exist forever in cyberspace, could result in unfair discrimination for innocent people pictured for years to come.

Arpaio is not the first to come up with the concept of posting mug shots online. Thesmokinggun.com and newspaper Web sites have been doing it for years, and the public is responding with clicks.

Arpaio is used to a great amount of attention. He's famous for his tough treatment of those convicted in his Arizona jurisdiction. He has fed inmates green bologna and made them wear pink underwear. His unconventional approach to law enforcement has drummed up many headlines over the years.

Last week, an investigation into alleged misconduct by Arpaio's subordinates ended with a 1,022-page report delivered to the sheriff. The investigation was led by Pinal County Sheriff Paul Babeu, and a letter to him from Arpaio said privacy limits prevent disclosure of the report until those named can appeal its findings.

11:31 am ET October 18, 2021 RETWEET
Companies and people who want to cancel out the impact of their emissions on the climate often turn to something caâ€twitter.com/i/web/status/1â€¦td
CNNweather

10:42 am ET October 18, 2021 RETWEET
"We don't expect this to be quite as heavy, but it is certainly going to continue," says CNN meteorologist Pedram Jâ€twitter.com/i/web/status/1â€¦pg
CNNweather