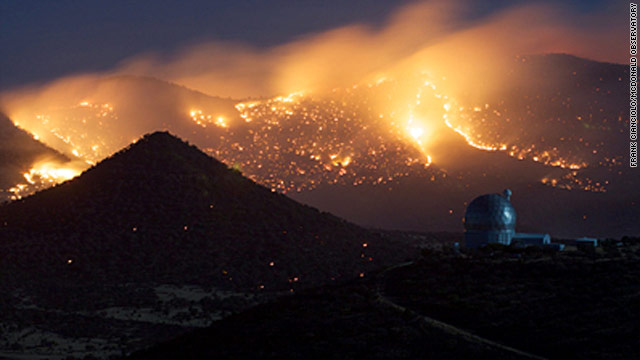 A picture taken Sunday at Texas' McDonald Observatory shows both a wildfire and a controlled burn meant to protect the facility.
April 20th, 2011
01:41 AM ET

Crews protect Texas observatory with fire of their own

The McDonald Observatory in West Texas' remote Davis Mountains is home to one of the world's largest optical telescopes and the StarDate radio program. It's also a residence for about 80 staff and family members, some of whom remained as fire crews defended the property from one of the wildfires that have devastated the state this month.

As the wildfire crept up a canyon perhaps 1 mile from the center late Saturday, a regional disaster team set a controlled fire on a nearby peak, aiming to consume the brush that otherwise could have led the wildfire to the observatory, staff member Frank Cianciolo said.

The controlled burn seems to have worked, and the wildfire - though not contained - is burning elsewhere, he said in a telephone interview Tuesday night.

Cianciolo - a senior program coordinator at the visitor center for the University of Texas-run observatory - has stayed on the property for most of the time since the wildfire reached nearby Fort Davis on April 9, taking the pictures you see in this post and several others.

"It was exhausting, to have to worry about ... whether the fire was going to come roaring our way," he said. "Without having the visitors here - because we were closed down much of that time - I didn't have a whole lot to do, so I put myself in charge of getting pictures to document it." 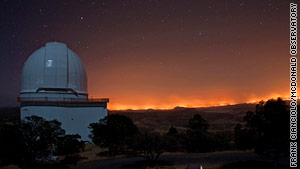 This picture, taken from the observatory grounds on April 9, shows the glow of the wildfire about 8 miles away.

Some of Cianciolo's pictures show the property's distant view of the wildfire on April 9, which was burning some homes in the town of Fort Davis about eight miles away. The swift fire had started miles to the south only hours earlier, giving Fort Davis' volunteer firefighters and residents little time to react, he said.

The wildfire and its thick smoke prompted the center to close a couple times since April 9, most recently Sunday through Tuesday. The center - which Cianciolo says receives about 60,000 visitors per year - intends to reopen Wednesday as long as the fire stays away, observatory spokeswoman Rebecca Johnson said.

Though the staff was never ordered to evacuate, some did, including Cianciolo for one day when the smoke was too thick for him to take.

"We are incredibly grateful for the firefighters who've been up here for over a week now," he said. "These guys are incredible, going up in these conditions that are incredibly dangerous and rescuing the area, basically."