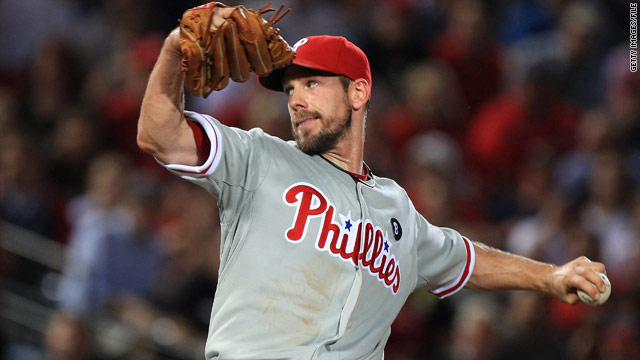 A robot will precede Phillies ace Cliff Lee to the mound Wednesday in Philadelphia.
April 20th, 2011
06:39 AM ET

It may not be able to break into what many consider the best pitching rotation in baseball, but PhillieBot will certainly be a major-league phenom when it throws out the first pitch at Wednesday afternoon's Philadelphia Phillies game.

PhillieBot, a combination Segway, robotic arm and jai-alai-like scoop is the brainchild of the director of Philadelphia's city science festival and the handiwork of a group of University of Pennsylvania engineers, according to a report on philly.com.

Science festival director Gerri Trooskin came up with the idea for the robot to headline Science Day at the ballpark. She pitched her idea to Penn's General Robotics, Automation, Sensing and Perception (GRASP) Laboratory, where engineers Jordan Brindza, Jamie Gewirtz and Christian Moore designed, built and programmed the robot.

PhillieBot will be firing to home plate at 30 to 40 mph on Wednesday, well below the what the guys who'll take the mound later can throw. But philly.com reportsÂ  "the robot's computer brain can be infinitely tweaked to change pitch velocity and trajectory."

No word on whether a water tank for a spitter could be an accessory.

Obama at Facebook: President Barack Obama visits Facebook headquarters in Palo Alto, California, on Wednesday, for the second of three town hall-style meetings on the economy.

During his first event Tuesday in Virginia, Obama emphasized what he called a balanced approach that both cut spending and increased revenue by ending tax cuts for the wealthy; maintained or increased spending in education, research and infrastructure development; and continued reforms launched in last year's health care bill of the Medicare and Medicaid government-run health systems for senior citizens and the poor and disabled.

Obama will also include four political fundraisers during his stop in the Bay Area, the San Franciso Chronicle reports.

Severe weather threat: The threat of severe thunderstorms and tornadoes continued Wednesday to hang over portions of the Midwest and South, after another round of violent weather pummeled parts of both regions the day before, according to the National Weather Service.

Parts of Arkansas, Mississippi and Tennessee remain under a tornado watch until 10:00 a.m., according to the National Weather Service.

So far there have been no reports of injuries or deaths from the latest round of storms, according to emergency management officials and law enforcement.