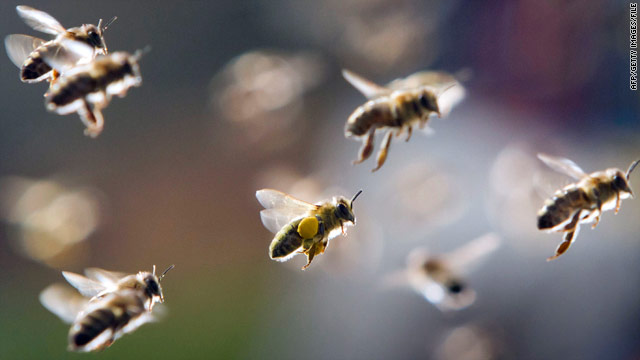 The species of bee involved in a fatal attack on an elderly couple has not been identified, a Texas paper reports.
April 20th, 2011
10:57 AM ET

An elderly Texas couple were killed by bees this week after they apparently tried to remove the insects from a fireplace in a house on a remote ranch, the Valley Morning Star reported Wednesday.

William Steele, 90, died Monday in the house on a ranch outside Hebbronville, Texas, about 100 miles west of Corpus Christi. His wife, Myrtle Steele, 92, died Tuesday after she was flown to a Corpus Christi hospital, the couple's daughter-in-law, Judy Steele, told the newspaper.

Judy Steele told the paper that the bees swarmed when her father-in-law sprayed a hive the insects had built in the small home's fireplace.

Her husband, Richard Steele, was with his parents when the attack occurred, Judy Steele, told the Morning Star. He was also stung but was able to drive several miles to the nearest phone to call emergency services, she said. There is no cell phone service in the remote area, she said.

Jim Hogg County sheriff's deputies responded and told the paper they were able to get Myrtle Steele out of the house.

“We were getting stung in the process, but we were able to place a blanket over her and take her to an awaiting ambulance - we did what we could,” the paper quoted Deputy Reyes Espinoza as saying. William Steele died inside, Espinoza said.

Judy Steele said her mother-in-law was stung more than 300 times.

Espinoza told the paper the species of bee involved in the attack had not been identified and the hive had yet to be removed from the house.