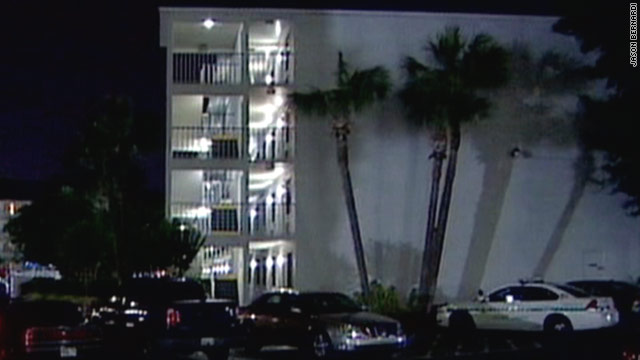 A girl fell from a fourth-floor balcony of this Econo Lodge in Orlando on Wednesday night, authorities said.
April 21st, 2011
10:23 PM ET

A British woman who came to Florida as a tourist will leave as something of a hero.

Helen Beard was at an Orlando hotel's pool when she saw a 2-year-old girl hanging from one of the building's fourth-floor balcony railings on Wednesday night, the Orange County sheriff's office said, according to CNN affiliate WKMG.

Beard - on vacation from England - ran underneath the railing, and Jah-Nea Myles fell, striking the third-floor railing on the way down, sheriff's Cpl. Susan Soto told CNN, citing an officer's report. Beard caught Jah-Nea, but the child slipped from her arms and struck the ground, and witnesses called 911, Soto said.

Despite the fall, the girl - who was taken to a hospital - suffered no injuries, bruising or scratches and was in good health, medical personnel told a sheriff's officer. The officer also said the girl was playful and did not appear to be in pain, Soto said.

"It was a miracle" the child wasn't injured, sheriff's spokeswoman Denise Rollins said, according to WKMG.

The girl's mother, Helena Myles, who was staying at the hotel, told investigators she had left the child with a friend who was staying in an adjacent room, according to Soto. The friend said she was in a bathroom when she heard screaming coming from outside. She then looked outside and saw Jah-Nea on the ground with Beard, Soto said.

Beard told investigators she believed Jah-Nea may have slipped through the railing that was lining the fourth-floor balcony, according to the sheriff's office.

The Florida Department of Children and Families is investigating, but no charges were pending as of Thursday morning, according to WKMG.