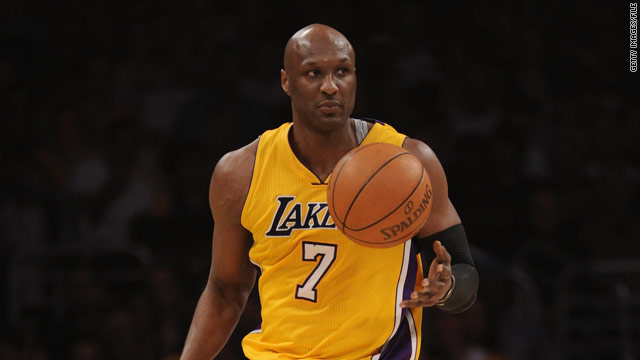 A crucial Game 2 victory for the Lakers came courtesy of the team's Sixth Man Award winner, Lamar Odom. With 16 points against the New Orleans Hornets, Odom proved exactly why he deserved the accolade. As SI.com's Lee Jenkins explains, while Odom has been widely criticized for his inconsistency and off-court distractions, he displayed incredible skill when it mattered most - particularly on a quiet night for stars Kobe Bryant and Pau Gasol.

"The reality show, the cologne, the billboards featuring Odom and [Khloe] Kardashian make him an easy target, both inside the locker room and out," writes Jenkins. "But Odom remains the most popular Laker, beloved by teammates for his genial nature and generous spirit, which made it impossible for him to stew over his demotion two years ago. Because Odom was willing to come off the bench, the Lakers could start Andrew Bynum and Pau Gasol, keeping all three pillars of their dominant frontcourt. Although Gasol was as ineffective in Game 2 as he was in Game 1 - he is now 4-for-19 in the series - Bynum and Odom combined for 33 points and 18 rebounds. The Lakers, who were improbably outscored in the paint in Game 1, finally exploited their stark size advantage."

With the series against the Hornets now even, the question remains whether the defending champion Lakers will be able to utilize a team they feel is deeper than last season to charge into the Finals and claim another championship.

Up tonight (all times Eastern):

2:03:02 - Time in which Geoffrey Mutai completed the Boston Marathon. Officials will ask track's international governing body to declare his time a world record, even though the course is technically ineligible.

25 - Number of nominees under consideration for the 2012 NASCAR Hall of Fame class.

2 - Number of years Yankees pitcher Bartolo Colon (1-1) went without a win before striking out 7 in 6.2 innings in New York's 6-2 victory Wednesday against the Toronto Blue Jays.

2:29 pm ET June 24, 2021 RETWEET
The UK is honoring Alan Turing by unveiling a mural at the country's spy headquarters. He will also be the firstâ€twitter.com/i/web/status/1â€¦DE
cnni

2:15 pm ET June 24, 2021 RETWEET
Researchers have discovered what they say is the earliest direct evidence of a shark attack on a human, with the seâ€twitter.com/i/web/status/1â€¦b4
cnni

2:00 pm ET June 24, 2021 RETWEET
Researchers have discovered what they say is the earliest direct evidence of a shark attack on a human, with the seâ€twitter.com/i/web/status/1â€¦DA
cnni