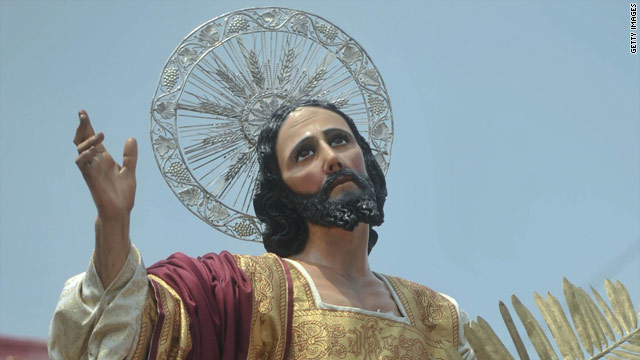 Overheard on CNN.com: Jesus on trial

Religion is always a talker for CNN.com readers, and with today being Good Friday, we take a look at a story on what kind of justice Jesus would get in a modern world.

A mock trial in Richmond, Virginia, sought to find out if Jesus would be sentenced to death or simply faced life behind bars with no chance for parole.

Readers had a lot of different takes on how they thought the ruling should go. Most tackled the subject matter seriously and a few made jokes. The comment of the day was a clever tangent from the main topic: "If the crown of thorns don't fit, you must acquit," said Colin in jest.Â Here's a helping of the best of the rest.

Jesus on trial: What would a modern jury do?

Dave said, "I'm sure Jesus would be in favor of the death penalty, carry a gun and denounce healthcare for all."

Faithless said, "In our modern world of psychiatry and medicine, Jesus would've been laughed at for being a total wack job. Just imagine the headlines, 'Man in prison claims to have changed water into wine. Man in prison claims to have walked on liquid water.' Blah blah. There are 'prophets' all over the world with 'miracles' and 'special powers' that we immediately disprove as frauds. Why are people so convinced that Jesus was legit?"

Dan said, "What a strange mock trial performed by Christians none the less. If Virginia's legal system was available to Jesus then he would not have died on the cross. He may have found another way to die for our sins however being imprisoned for life it would have taken a suicide to make it happen. How do they expect their religion to be born without Christ being put to death?"

Some said it was Christ's destiny, no matter what any jury says in any era. greg pallone wrote, "Even if the trial was today, Jesus would still be executed. This is God's plan, period."

Man dies after being shocked with a stun gun

Another story that got lots of attention was about a man who died after being handcuffed and shocked with a Taser stun gun, according to Orlando police. The suspect had reportedly caused a disturbance outside a movie theater near Universal Studios. Commenters debated the use of deadly and non-deadly force, and talked about the risks officers face.

A man causing a disturbance outside a movie theater near Universal Studios died Friday after being handcuffed and shocked with a Taser stun gun, Orlando police said.

Many of the responses said people are responsible for staying out of trouble. RKen wrote in the same thread, "Being mentally ill, having a diabetic reaction, or really anything doesn't give excuse to cause trouble and violently resist arrest. I have sympathy for people in any of those situations, but if people don't know how to behave in public and abide by law then they should not be in it. This isn't to say he deserved to die, but to act like the cops should've just let him have his way is ridiculous. When people resist arrest, you use a tazer. Would you rather police officers were given permission to assault a violent person until they cooperate (which by the way, can also lead in accidental/unexpected death)?"

But LisaChristin said, "Exactly CGD. When having a diabetic reaction one can appear to be drunk, belligerent and yes irrational. They need immediate medical attention - not a stun gun. Police have made this mistake before."

heyview said, "Maybe his irrational, erratic behavior was caused by a medical problem. (I watch Dr. House.) He might have been going to die anyway, taser or no taser. No matter what, this is very sad for the man and his family. We should all send our good thoughts to those who loved him."

RSL4life said, "The off-duty cops were moonlighting as security guards and were bored. It's their word against his, and he's dead now. Who knows if this guy was really being crazy, or just didn't trust cops. I certainly don't. In most sates, you don't even have to have a college degree to be a cop, and I bet these two were not exceptions. They just wanted a chance to use one of their toys." blankman2001 replied, "Wrong. Irrational people should be away from others. Whatever away means."

Mindfulmike said, "You guys make it sound like the cops went 'heh heh, lets kill this idiot.' A man got violent, so they used a taser to get him under control. This happens MANY MANY MANY times daily around the world and an extremely small percent of people are actually injured by it. Tasers save lives and these officers did the right thing."

ceomom wrote, "I'm not in law enforcement so I won't judge, and I have to trust that most police officers are doing what they need to do to protect the public and themselves; but wasn't there a time (before tasers) when two police officers could take down one unarmed man without a real problem?" 19TIGER72 replied, "Yes there was, but today's law enforcement are too busy with other things. I'm sure while one was trying to control the man the other officer was on his smartphone, tweeting what he was doing. 'I'm here with my partner and we are bringing down a Top 10 FBI Most Wanted. Doughnut run afterwards!'"

Lady Gaga says she's sorry she used the "R" word in comparisons of her to Madonna. Readers talked about the appropriateness of this phrasing, as well as the trappings of celebrity and the veracity of claims that Lady Gaga really does sound like Madonna.

Kate said, "'Get over it.' Hmmm ... same thing can be said for using the "N" word or the "F" word. Retarded used to be a clinical term but thanks to years of bigotry and cruelty towards those who cannot defend themselves, it has been removed from the clinical vocabulary and is now, and rightly so, considered offensive. If we are going to play this PC game then it applies to all, not just the gays and blacks."

Jeepers said, "I don't like the 'R' word and I haven't for a very long time. I like that Lady Gaga apologized. She's all about supporting people who feel like they don't fit in. So, it was a bit of a surprise to hear that she used the word in the first place. But at least she, unlike many people, realize it's an inappropriate, uncool word."

A commenter using the name Not everyone has to be role model noted, "Seriously, she's a performer. She doesn't have to watch her mouth or be a role model for your kids. Be your own kids role model and stop trying to create expectations for whoever happens to be popular. IF she wants to swear, so be it. Don't listen if you don't like it. I don't believe that special ed students or older, special needs adults are referred to as retarded. I don't believe that term is used to describe people with special needs (except incorrectly). So, if it also means 'stupid' and is used as such (and not directed at a special needs person) than what does it matter? The F-word is used in a lot of different ways."

Some said the "R" word isn't offensive. fifi said, "'Retard' has only become offensive because someone wanted to make it offensive. The word has always had the legitimate meaning of "slow". It isn't an offensive word and it describes certain mental disabilities accurately. This is no "n" word, or "f" word. I will continue to use it, just not around people who may be retarded, that.'

Other comments were about personal experiences. kel said, "As a parent of mentally retarded child it's interesting to see so many people on this forum joking about it. If your next-door neighbour was mentally retarded would you have the guts to call he/she that in front of their family. I'm sure they would think you were hilarious! Of course you have no problem doing it on the internet when you don't have to face anyone...."

Another portion of the comments talked about Lady Gaga's music. Newsflash! wrote, "All of modern pop music is recycled from a trash can discovered in John Lennon's New York apartment in January 1980. Lady Gaga is scraping the bottom of this particular barrel, so it's no surprise she ends up with a knock-off of Madonna's 'Express Yourself.' I suppose if you want something original, you might listen to Otis Redding or someone who doesn't need to wear a meat-dress to sell albums."

The Chinese government has ordered the country's coal mines to "produce as much coal as possible" as it tries to inâ€twitter.com/i/web/status/1â€¦5U
CNNweather

7:16 pm ET October 20, 2021 RETWEET
The Vikings used their longships to cross the Atlantic Ocean and settled in Canada as early as 1021, according to aâ€twitter.com/i/web/status/1â€¦Nf
cnni

7:00 pm ET October 20, 2021 RETWEET
US federal prosecutors have disclosed that the government still cannot find most of the classified data they say waâ€twitter.com/i/web/status/1â€¦vM
cnni

6:46 pm ET October 20, 2021 RETWEET
A 4-year-old boy who slipped off a cliff and fell about 70 feet suffered just some scrapes and bruises, the Wolfe Câ€twitter.com/i/web/status/1â€¦rs
cnni