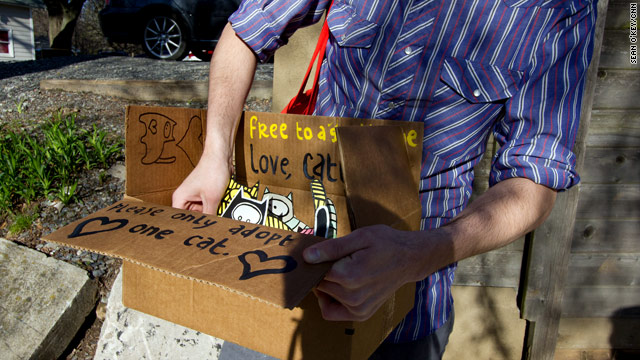 Art lovers in Atlanta are on the prowl this weekend. But they're not after Easter eggs. Using social media to hunt for clues, they race from location to location seeking the ultimate prize: a palm-sized magnet shaped like a cartoon cat.

The magnets, each hand painted, are the brain child of a local artist who goes by the name of his creation: Catlanta.

To hear him tell it, the whole enterprise grew organically. The design came from a sketch of his own cats made "cuter." Initially, the artist painted the cat on walls around town but a chance discovery of magnet sheets outside a dumpster gave rise to the less permanent tag prized by fans. The artist says he’s done with spray painting, citing the controversy associated with that type of permanent marking: "I want this to be something that the city supports."

While the artist has hundreds of gushing fans online, not everyone shares the excitement. Peggy Denby, who works with community groups and elected officials to eradicate graffiti, says she thinks his work may violate the city's code.

None of this seemed to bother Catlanta's fans as the Easter kitten hunt ended Saturday, with those who narrowly missed out Tweeting their tales of woe. These fans they may have another chance when the hunt resumes next week.