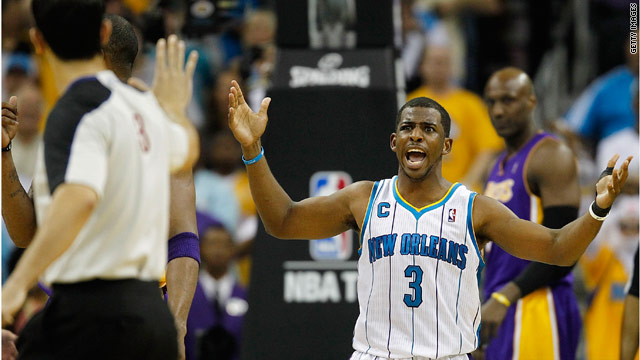 The New Orleans Hornets' Chris Paul made his presence known against the Lakers on Sunday.
April 25th, 2011
05:35 PM ET

The bane of Los Angeles' existence as of last night: Chris Paul.

The New Orleans Hornets point guard and his team managed an astonishing 93-88 win against the Lakers, tying his team's series with the reigning champs. Sans leading scorer David West, the Hornets managed to capitalize on its pick-and-roll game with Paul racking up a game high 27 points, 13 rebounds and 15 assists. As SI.com's Mark Haubner writes:

"This night in New Orleans was all about Paul. In the first half, the Hornets played less pick-and-roll than we've seen. They looked to get everyone involved with more of a motion game, and Paul was content to play facilitator, with four points on just three shots and nine assists. In the second half, New Orleans re-emphasized its pick-and-roll game, and its floor leader took over."

While two wins in their series against the Lakers is impressive enough for a team that entered the playoffs a clear underdog, the real question will be two-fold: Will Kobe Bryant, after sustaining a foot/ankle injury, be able to return for Game 5? And can the Hornets continue the momentum that they established in Game 4 regardless of whether the Lakers star is on the court or not?

More playoff action, of both the NBA and NHL variety, up tonight:

27 – Rank that tennis player Julia Goerges moved to after a stunning defeat of favorite Caroline Wozniacki in the Porsche Grand Prix.

26 – Number of points scored by Celtics’ power forward Kevin Garnett during the final game of Boston’s sweep of the Knicks.