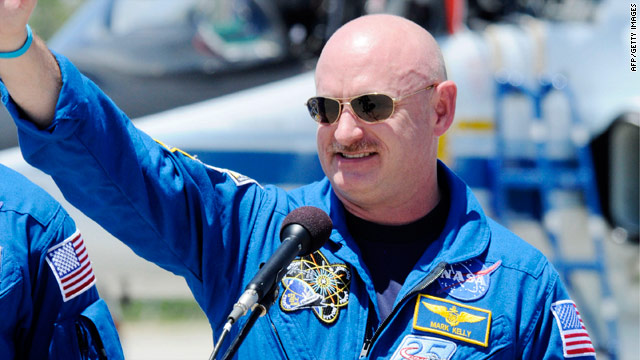 U.S. Rep. Gabrielle Giffords has worked hard in her rehabilitation to ensure she could see her husband command the final launch of space shuttle Endeavour, he said at Florida’s Kennedy Space Center on Wednesday.

Astronaut Mark Kelly and Endeavour’s five other crew members arrived at the center’s shuttle landing facility on Wednesday afternoon in T-38 training jets, two days ahead of the shuttle's launch. Giffords, his wife, has been recovering from a January gunshot to the brain but was cleared by doctors to attend Friday's liftoff.

Flanked by his crew upon arrival Wednesday, Kelly said he was looking forward to Giffords "getting here pretty soon."

"It's something she's been looking forward to for a long time," Kelly said. "She's been working really hard to make sure that her doctors would permit her to come, and she's more than medically ready to be here, and she's excited about making this trip."

Giffords, who has been rehabilitating at a Houston medical center, was expected to take a flight to Florida on Wednesday or Thursday. She is not expected to meet with the news media or make a public statement at the space center.

The Arizona Democrat was shot at a political event in Tucson on January 8. Six people were killed and 13 others, including Giffords, were wounded in the shooting.

Endeavour’s last mission is to deliver communications antennas and other equipment to the international space station. It is NASA's next-to-last scheduled shuttle launch, with the space agency retiring the whole fleet later this year.

Kelly, who will be making his fourth space flight, saluted Endeavour and the people who've made the shuttle program work.

“We’re going to take Endeavour out for … probably about 5 or 6 million more miles. It's already got about 110 (million) miles on it, and after 25 flights, we will hopefully land here on this runway, and then Endeavour is done with its service to the country," Kelly said.

Friday’s launch is scheduled for 3:47 p.m. ET Friday. U.S. President Barack Obama and his family also are among those expected to attend the launch.