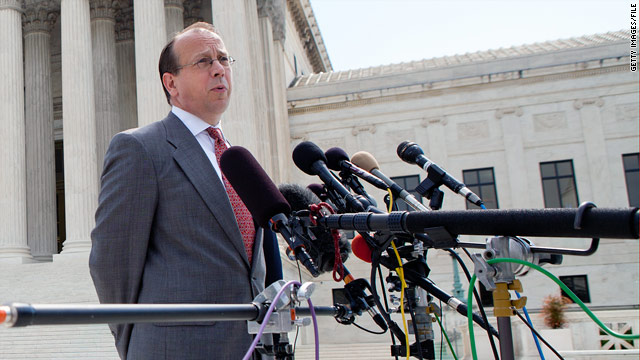 Attorney Paul Clement quit his job at a prominent law firm when the firm backed out of a controversial case.
April 26th, 2011
11:21 AM ET

Tuesday's Most Intriguing - Football player, a lawyer and a Japanese figure skater

PAUL CLEMENT
The former U.S. Solicitor General during the George W. Bush administration has resigned from his post at the Atlanta-based law firm of King and Spalding. According to NPR, Clement resigned as a partner at the firm after King and Spalding decided not to represent the House Republicans in their legal effort to support the Defense of Marriage Act. Earlier this year, the Obama administration announced that it would not defend the constitutionality of the law, which speaks against gay marriage. On Monday the law firm withdrew from the case and Clement resigned. "I resign out of the firm belief" that a lawyer should not abandon his client "because the client's legal position is extremely unpopular in certain quarters," Clement said in a statement.

ERIC LEGRAND
The Rutgers football player who was paralyzed in an October 2010 game at Meadowlands Stadium in New Jersey gave his first interview yesterday to journalists, insisting that he will some day walk again. LeGrand, a 20-year-old 6-2, 275-pound junior, broke his C3 and C4 vertebrae during a play against Army. While he uses a power chair that he guides with his mouth, LeGrand said that he's regained sensation in his body and can move his shoulder slightly. He lives with his mother in New Jersey, does therapy three times weekly and takes two classes via Skype. His sunny attitude is what contributes to his success, his mother told the New York Daily News. "He knows, 'Maybe playing football is something I'm not supposed to do,' " she said. "'I'm supposed to do something bigger than that.'"

MAO ASADA
The Japanese figure skater will defend her 2010 world championship title Tuesday in Moscow, rather than in Japan as originally scheduled. The 2011 World Figure Skating Championships were slated to begin March 21st in Tokyo, but Japan's earthquake on March 11 forced the International Skating Union to delay and relocate the competition. The Japanese athletes and coaches all wear stickers on their jackets that read "Rebirth Japan. We are always with you." Joining Asada will be Takahiko Kuzuka, Japan country's men's champion. He leads the men's competition going into Wednesday's short program by nearly 30 points.

CARL LEWIS
The U.S. Olympic Track Gold Medalist announced earlier this month that he would seek a seat in the New Jersey State Senate. In today's Philadelphia Inquirer, Lewis said that New Jersey Gov. Chris Christie tried to dissuade Lewis from running hours before the announcement. The conversation with the governor came after several days of talks with Christie's staff, Lewis said. Staff members threatened that if Lewis decided to run, an athletic program he wanted to start would be scuttled. Christie's office is downplaying the accusations as a "silly" misinterpretation.