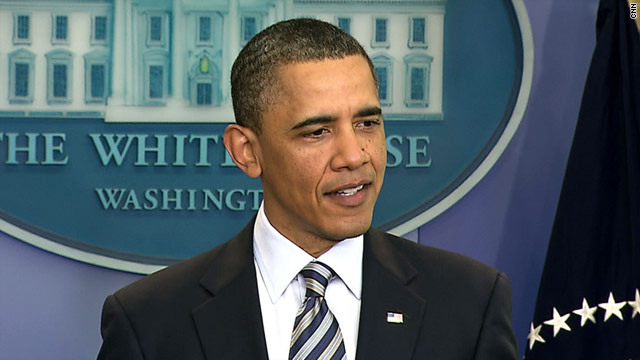 President Barack Obama says the country does not "have time for this kind of silliness."
April 27th, 2011
01:36 PM ET

Doubters that President Barack Obama was born in the United States, led recently by possible Republican presidential candidate Donald Trump, got their answer Wednesday when the White House released Obama's original birth certificate. "Birthers" have insisted that Obama was born overseas - possibly in his father's home country of Kenya - and therefore may be constitutionally ineligible to serve as president. Obama said Wednesday that he released his original birth certificate because the country does not "have time for this kind of silliness."

Many CNN.com readers expressed frustration that the president was put in the position of having to show his birth certificate at all.

CrunkSwaggaG said, "I think Donald Trump and about half of the Republican Party owe President Obama a sincere apology." flatbushfred said, "Obama shouldn't have had to do this. It's blatant racism." LPLove said, "No president in history has ever been treated this way. The birthers are nothing more than racists wrapping themselves in the flag. Disgusting." harryball said, "I feel bad for this guy. When was the last time a president was forced to show his birth certificate two years into his presidency? Oh that's right, never. Even as president, black people are still being treated as second-class citizens."

About Trump’s role in the controversy, CNN.com readers had plenty to say:

icecold12 said, "Now Trump has to live up to his end of the deal and deliver his income tax information and net worth. Obama called his bluff and I bet he folds." BobSacamano said, "I'd like to know how much debt Trump has discharged throughout his life by claiming bankruptcy. How many millions has he stiffed his investors and creditors for?"

USAlegend said, OBAMA: "On Your Face Sucker, Here is my Birth Certificate.’ TRUMP: "Well......huh.....hmmmm....But this doesn't prove that you are not a Muslim."

And now that the original certificate has been released, many CNN.com readers said it still won’t be enough for birthers.

W2ATL said, "This really won't matter. These clowns will have some new madness to cry about in three hours." livingston1 responded, “Really, do you think it will take that long? That kind of hate blinds them to any sense of reason.” Nagaina said, “Countdown to someone claiming the long form birth certificate is an 'obvious forgery'...3...2...1.” BubbaSponge said, “Now hopefully the birthers will give it a rest once and for all!!” TikiGawd said, “Nah, they'll start a movement saying Hawaii isn't really part of the United States because it's 'overseas.' " iroshi said, “It's a shame the ‘birthers’ can't focus on an issue that is actually important. For instance, the national debt, unemployment, taxes, etc. What an incredible waste of time and money this has been.”