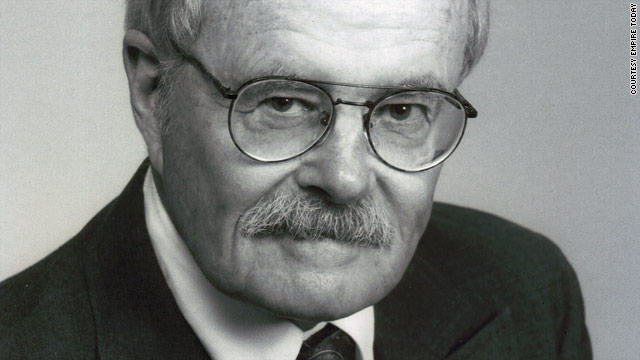 Elmer Lynn Hauldren provided the voice of the "Empire Man" for nearly 40 years and became synonymous with the brand.
April 28th, 2011
12:45 PM ET

Elmer Lynn Hauldren died Tuesday at his Evanston, Illinois, home, according to his family, the Chicago Tribune reports.

On Wednesday, the flooring company acknowledged the impact of his nearly 40-year career.

â€śLynn was truly passionate about the Empire brand," Steve Silvers, Empire Today's CEO, said in a statement.Â "He has made an indelible mark on advertising history with his creativity and warmth."

Hauldren started working for Empire in the early 1970s after the company's owner requested him for TV spots, the company said. Soon,Â Hauldren would provide the voice of the "Empire Man" and become synonymous with the brand. He wrote and performed the jingle with the a capella group the Fabulous 40s.

Hauldren did more than voice-over work. He was also a member of the singing quartet Chordiac Arrest.

Hauldren was humble about his notoriety. According to the Tribune, he downplayed his fame:Â "People are good-natured," he said, "but once in a while they'll grab at you and say, 'Here's that carpet dude!' or 'Hey! Aren't you somebody?' I always hope folks understand I'm not a celebrity. I'm just a TV pitchman, a glorified salesman."

On the Web, users sent a stream of well wishes to Empire's TwitterÂ and Facebook feed.

Mammoths and other giant creatures of the Ice Age such as woolly rhinos survived longer than scientists thought, coâ€twitter.com/i/web/status/1â€¦TG
cnni

4:57 pm ET October 24, 2021 RETWEET
Noodle, A 13-year-old adopted pug, has a massive following on TikTok for his hilarious forecasts of the future.â€twitter.com/i/web/status/1â€¦R6
cnni