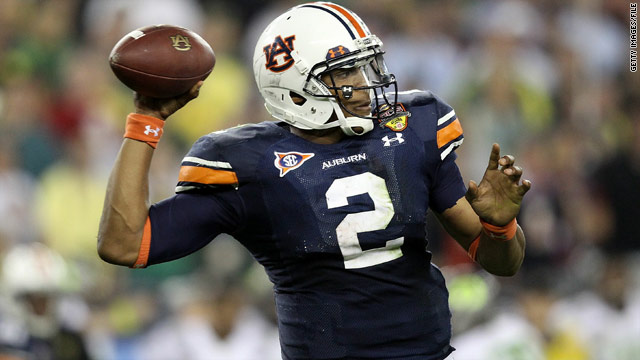 NFL draft: The National Football League holds its draft of college players Thursday night, with Auburn quarterback and Heisman Trophy winner Cam Newton the favorite to be picked No. 1 overall by the Carolina Panthers.

In his mock draft, SI.com's Don Banks says the Panthers, who earned the top pick with a league-worst 2-14 record in 2010, would trade out of the top spot if they could, but that is unlikely.

"They will pick Newton, but they'll do so with a queasy feeling in the pit of their stomachs. They know he carries risk, but they also feel they have to roll the dice and take the quarterback who has the potential to make the biggest possible impact," he writes.

The draft comes amid an off-season of labor strife in the league. A federal judge this week ruled league owners must resume business and end a lockout of players from team facilities. Owner appeals of that ruling are ongoing.

So when their names are called at Radio City Music Hall in New York City Thursday night, the collegiate stars won't know when they might first don the uniform of their NFL team or even if there will be an NFL season in 2011.

The first round of the draft begins at 8 p.m. and can be seen on the NFL Network. Second and third rounds are Friday at 6 p.m. and the fourth through seventh rounds are Saturday at noon.

Earthquake drill: Residents of 10 states from Oklahoma to South Carolina will practice earthquake safety drills as part of the Great Central U.S. Shakeout.

Organizers say more than 3 million people will participate in the event, scheduled to begin at 10:15 a.m. local time. Participants will practice the "drop, cover and hold on" technique to protect themselves in the event of an earthquake.

Since their launch 33 years ago, the spacecraft have traveled 10 billion miles to the edge of our solar system and are now heading toward interstellar space.

Besides sending information on their journey back to Earth, the spacecraft carry "a collection of images and sounds from Earth as a message to possible life elsewhere in the galaxy," NASA says.

10:21 pm ET September 23, 2021 RETWEET
A southern Pennsylvania school board has reversed its decision to ban anti-racism books and resources. The reversa‚Ätwitter.com/i/web/status/1‚Ä¶6o
cnni

10:02 pm ET September 23, 2021 RETWEET
The Justice Department has unsealed charges against an organizer from the conservative advocacy group FreedomWorks‚Ätwitter.com/i/web/status/1‚Ä¶bV
cnni

9:19 pm ET September 23, 2021 RETWEET
Just yards from where thousands of migrants are waiting to be processed by American immigration authorities at the‚Ätwitter.com/i/web/status/1‚Ä¶aG
cnni