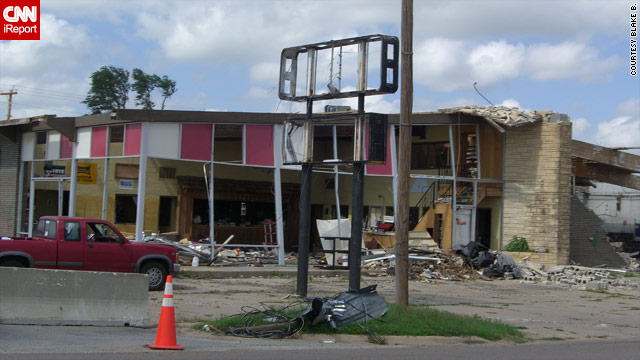 Overheard on CNN.com: How to defy a tornado

“I'm from New Jersey and I actually never heard anyone blame anything on God there. It was pretty refreshing.” - shanker67

Southern storms: 'I don't know how anyone survived'

Hundreds of people were killed when a storm front swept tornadoes into six southern states. Alabama was hardest hit. Some drew comparisons to the "super outbreak" of tornadoes of 1974, when 148 tornadoes were reported in 13 states and 330 people died.

Exopolitics said, “I've never heard so many tornado sirens in my life! This year has been really bad and yesterday was one of the scariest days of my life.”

Dano973 said, “ I moved out to southern California for work three months ago. My wife, family and friends are still back in Georgia. Last night was terrifying for everyone, including myself. I'll trade one major earthquake for what they're going through this spring. This is the fourth severe storm in the past month...”

judyblueeyes said, “One of the predicted effects of climate change is more severe weather all over the world. Could this be a factor in these tornado outbreaks?”

Some CNN.com readers called for stronger buildings, such as houses structured for Category-5 resistance. But rhquad said “Those Cat 5 homes are built for 100-mph winds. Even moderate tornadoes can far exceed that. If you wanted a tornado-proof house, you'd have to design for winds over 350 mph.”

mslman71 said, “The probability of being hit by a tornado is so incredibly small that the extra cost is simply not warranted. While the loss is terrific for these people, more will die driving to work in the next week than from the worst outbreak of tornados in however many years."

schnuptz said, “Storm shelters are what save lives, not homes.”

GTsxtysix said, “ I think we need to seriously rethink the way we build our homes and offices, even if only to make just one room a survivable shelter. Otherwise, we basically have to learn to live with Mother Nature occasionally coming to town and tearing it to shreds.”

Armadillos linked to leprosy in humans

A new study confirming a genetic connection between armadillos and human leprosy had CNN.com readers discussing the pros and cons of armadillo cuisine. SeamanStainz said, “C'mon. Who eats armadillos?” rothgar replied, “Possum on the half shell.”

CommonSenzWA said, “As kids growing up in nowhere Florida, we ate armadillos all the time. The meat is dark and very sweet. It was just taken as common knowledge that they carried leprosy and that all meats had to be thoroughly cooked.”

supervhell said, “I'm just a country boy about to turn 60, and until my early 20s we ate a lot of armadillos–even went out one evening and put more than 50 in the freezer. It sounds like someone wants to put a scare on for some reason.”

TexTeacher said, “When I was a Boy Scout (during the 1960s in central Texas) we ate armadillos during camp outs. We did this for years and never got sick. Then in the 1980s, Lone Star Beer commercials featured a beer-drinking armadillo. Folks started trapping and stuffing them. Word got out that they carried leprosy and people quit hunting them.“

6251 said, “I have heard that some peoples of South America keep varieties of armadillos as edible house pets. During the Depression, hungry people often ate armadillos. They were called “Hoover hogs” by people angry with President Herbert Hoover’s broken promise of a chicken in every pot. The meat is said to taste like fine-grained, high-quality pork.”

DougLenatSux said, “I was in El Salvador when my wife's aunt set the dinner table with armadillo. I told her I couldn't eat it, as it was so far outside of what I was accustomed to eating. I urged my pregnant wife not to eat it too. This was before I learned of the connection between armadillos and leprosy. About 15 years later, this aunt died of some disease that presented itself with skin lesions. In short, I think she died from eating armadillo.”

cpc65 said, “Surgeon General's Warning: Eating the Road Kill May Be Hazardous to your Health.”

The best-worst film titles of all time

The new movie “The Beaver,” starring Mel Gibson, sparked a discussion about which movies have the worst titles. While CNN.com writer Lisa France listed such duds as ‘Stop! Or My Mom will Shoot!’ ‘Snakes on a Plane’ and ‘Octopussy,’ readers had their own suggestions.

Razdex said, “I'm surprised I haven't seen many posts for ‘The Human Stain.’ “

palustris said, “I can't believe "Meet the Fockers" isn't on there! That is the worst name of all time.”

ShannonNutt said, “Are you kidding me, CNN? ‘Snakes on a Plane’ is one of the best titles of all time. And I'm surprised you didn't mention the upcoming ‘The Dark Knight Rises’ as one of those ill-advised titles.”