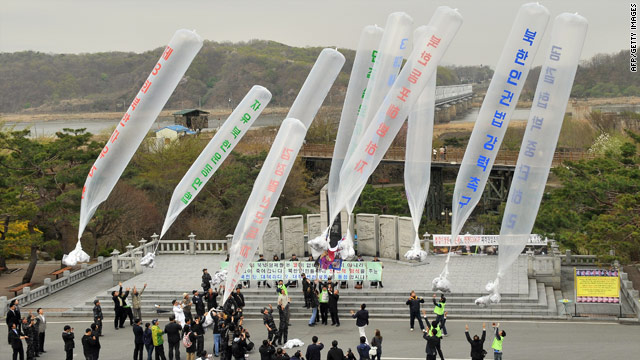 About 50 activists, mostly defectors from the North, launched 10 of the balloons from Imjingak, north of Seoul, the South's Yonhap news agency reported.

It was the first launch of the propaganda balloons since the North last week threatened to respond with artillery fire against the launch location, according to the Yonhap report.

The group last sent balloons over North Korea on April 15, the birthday of the North's late leader, Kim Il-sung, Yonhap reported. Those leaflets highlighted democracy movements in the Middle East and North Africa, a message designed to inspire a similar movement in North Korea

Friday's propaganda launch comes a day after┬ĀPresident┬ĀCarter returned from a visit to North Korea with word that its leader, Kim Jong Il,┬Āwould hold a summit with his South Korean counterpart at any time.

South Korean President Lee Myung-bak is declining any official contact with the North until Pyonyang accepts responsibility for the sinking of the warship Cheonan in March 2010, which left 46 sailors dead, and the November shelling of a South Korean island in which two troops and two civilians died.

Note: no evidence of any serious voting issues in FL where Trump won by 3% over Biden. And yet... wptv.com/news/state/govŌĆ”
susancandiotti

9:02 am ET May 6, 2021 RETWEET
RT @TIME: Moderna reports that booster doses of its COVID-19 vaccine appear to be effective against virus variants ti.me/33x1g57
susancandiotti

11:44 pm ET May 5, 2021 RETWEET
Liz Cheney: ŌĆ£The Republican Party is at a turning point, and Republicans must decide whether we are going to choosetwitter.com/i/web/status/1ŌĆ”rcOM
susancandiotti