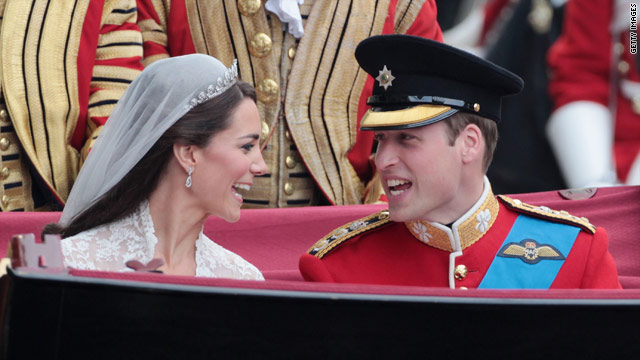 Months of planning, media hype and plenty of speculation about the dress are over. Prince William and Catherine Middleton tied the knot at a beautiful ceremony in Westminster Abbey. If you didn't get a chance to watch the wedding, here's your front row seat to some of our favorite moments.

William's first glimpse of Kate - It's arguably the most exciting part of the wedding, where the groom sees his bride for the first time on their big day.  Just take a look at Prince William's face when Catherine approaches. He looks so in love.

A royal 'I will' - It's the moment we'd all been waiting for.  Prince William looks longingly into Catherine Middleton's eyes, holds her hand delicately and places a gold ring on her finger.  The two exchange vows to love, comfort, honor and keep each other as long as they live.  The royal couple is officially married.

The first - and second - kiss - Having a royal wedding is hard enough, but the biggest pressure for the royal couple ... the kiss on the balcony. In this case, it's more like kisses on the balcony.  You see the crowd wasn't too pleased with the first kiss that they started shouting "Kiss again!" .... so they did.

Goodbye Buckingham Palace - Who needs a carriage if you can ride off into royal bliss in an Aston Martin Volante DB6 MKII? This isn't just any regular Aston. It actually runs on a bioethanol fuel made from English wine wastage.  What's so great about this video is that Prince William is the driver and, if you didn't know any better, they look just like any typical newlyweds.  Congratulations on the marriage!