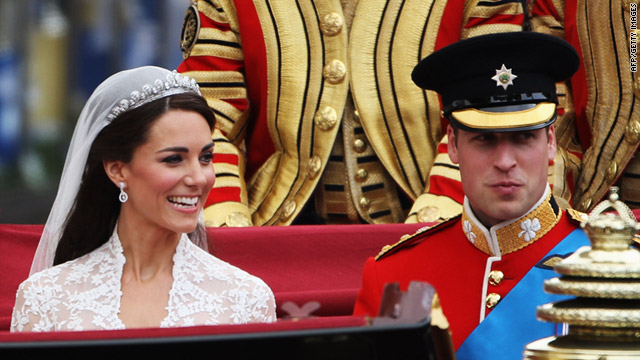 Exchange of the Day:
"The only normal looking person in this whole drama is the bride; the rest of them look like Martians or characters from a science fiction movie."–poulose

"You have to think of it like 'Star Wars' without the light sabers."–politauk

William and Catherine marry in royal wedding at Westminster Abbey

Two events shared center stage today: Prince William and Catherineâ€™s wedding in London and the aftermath of a string of tornadoes that killed nearly 300 across the American Southeast. Some CNN.com readers argued over whether the coverage was balanced or appropriate, while others shared their feelings and experiences about the separate events.

alexjones999 said, â€śHow wonderful. All of the problems in the world but the world is focused on this trivial nonsense.â€ť bilbo0s said, â€ś300 fellow Americans dead in Alabama. Countless lives of fellow Americans blown away in Alabama. What makes the front page? Will and Kate are getting married!!! That explains a lot about America.â€ť

LaserMan72 said, â€śWhich should have more priority? Over 300 people died in Storm (In USA) or Royal Wedding (Not even in USA). Give me a break.â€ť

But mr60233Â argued that â€śthis is an international event. Look at a map. Do you see those other pieces of land? They are called countries, and believe it or not, people that are not American live in them. I am sorry 300 people died. However, tornadoes happen all the time in the USA, and people die every day. This kind of event (the wedding) happens once every 30 years or so.â€ť

barbie1311 said, "There is absolutely nothing wrong with taking a few moments out of one's life to get lost in a fairy tale. It does not take away anything from the tragedies of the world. It's all about balance."

chitown27 said, "I'm in London right now, went to Westminster this morning and it was unbelievable. Most Americans have no sense of history whatsoever, which is why the trolls keep complaining on here. It was awesome watching the procession, the history and the pomp."

Savannah416Â said, "With roots in India, I am the last one to argue against comments against British colonization; however, given the state of the world today, I'm also able to set aside negative thoughts for a morning and relish the beauty of a wedding of two people who have been in love for quite awhile."

GuestColin said, â€śWhat a bunch of cranky people the lot of you are! I've bought a ring, planned it out and will be getting engaged this summer after a 3-year courtship. Best to Wills and Kate. The rest of you need to go take a nap!â€ť

TreeTop said, â€śBeautiful dress. Happy couple. Awesome news!â€ť Mjollnir said, â€śThis seems as good a reason as any to have some gourmet food and a toast tonight. We need more reasons to celebrate. There are still good things in this world.â€ť Ealdwulf said, â€śThey do certainly seem to be in love.â€ť

One UK resident, checking news on both sides of the pond, wondered why there were concrete bomb shelters in British gardens but no concrete tornado shelters in the South. Other CNN.com readers shared what it was like during and after the storm.

scrubbedÂ said, â€śHell came to visit us here in Alabama on Wednesday. It was absolutely terrifying, especially once the power went out and even cell phones didn't work. All you could do was listen for the tornado sirens and pray you wouldn't be killed. We still have a house. Thousands don't. We've lost our food in the freezer, but so many lost their lives. Those of us who survived will be here for the families of those who didn't. I want my kids to understand that they have survived a very dark day in history. ln2dablue replied, â€śI feel for ya bro. I'm glad you made it.â€ť crackiswhack said, â€śGod bless and hang tight.â€ť

BlogBlogger said, â€śI went out into my front lawn and removed tar paper and roofing shingles from the massive Tuscaloosa, AL, tornado and others. I live hundreds of miles away from the event. Amazing just how powerful a suction it had to put the debris into the jet stream.â€ť

pccoder said, â€śUnfortunately the death toll is only going to rise. My brother-in-law is a police officer in Tuscaloosa. He sawÂ six dead on one street late Wednesday. Once all the rubble is cleaned and the final tally is done, we're going to find that many more died than have been stated so far.â€ť

gdcoxÂ said, â€śI am mystified. Over here in the U.K , where I am checking in to understand the scale of this disaster (despite the wedding), we built concrete shelters in our garden when Hitler's bombs became a threat. So how come houses are built in your area with no cellars or buried shelter when you know your lives will be occasionally threatened by a tornado? It seems all in Birmingham knew this monster was coming, but in the many stories, no one talks of running for the shelter/cellar. â€ś

ArmanX,Â from Kansas, wondered the same thing. â€śI used to live in Kansas, and everyone had a storm cellar (or basement). Even after we filled ours in (it was falling apart), we would still go down the street to the neighbors who had a basement.â€ť

pkt1153Â replied, â€śThe water table for many places in the south US is too high for underground basements or cellars: they would flood. An aboveground cellar made of steel or concrete is cost prohibitive for most when you consider the chances of being hit by a tornado are about 1 in 2 million (about 7 times less than being struck by lightning).

NateDawgUM agreed, â€śAdditionally, the South is very wet and humid, so mold becomes a huge problem in basements. If you don't have a basement and you know a monster storm is on the way, it never hurts to hit up the local mall or Wal-Mart.â€ť

A US military intelligence report from last year that focused on Chinaâ€™s use of high-altitude balloons mentioned sitwitter.com/i/web/status/1â€¦MI9S
cnni

3:00 am ET February 7, 2023 RETWEET
Saudi Arabia is unveiling a reconstruction of the face of an ancient Nabataean woman after several years of work byâ€twitter.com/i/web/status/1â€¦1p
cnni

A US military intelligence report from last year that focused on Chinaâ€™s use of high-altitude balloons mentioned sitwitter.com/i/web/status/1â€¦MI9S
cnni

3:00 am ET February 7, 2023 RETWEET
Saudi Arabia is unveiling a reconstruction of the face of an ancient Nabataean woman after several years of work byâ€twitter.com/i/web/status/1â€¦1p
cnni