An Iraqi national has been arrested and charged in an alleged plot to assassinate former President George W. Bush cnn.it/3MLDZkM

Stocks surge on positive earnings news from JPMorgan Chase and other banks as investors pause their May selloff. ThŌĆtwitter.com/i/web/status/1ŌĆ”mL 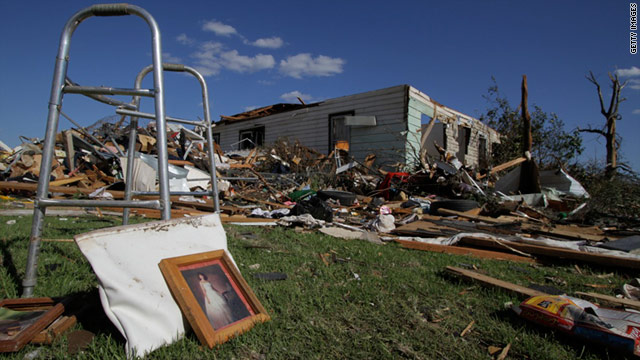 In Alabama, the hardest-hit state, the storms destroyed hundreds of businesses and homes, such as this one in Tuscaloosa.
April 29th, 2011
01:54 PM ET

Recipe for a disaster: How this week's tornadoes formed

A wave of storms swept through the South this week, laden with tornadoes that killed at least 300 people and left a multistate trail of destruction.

As authorities continue to assess the damage, recover bodies and restore power to thousands of homes and businesses in the storm zone, weather experts have many questions about the confluence of factors that formed such a violent weather system.

Did a perfect storm of sociological, meteorological and geographical events combine to create the second-deadliest tornado outbreak in the nation's history since 1950? The University Corporation for Atmospheric Research's Bob Henson, who recently wrote about the recipe for the storms, said it seems that way, but perfection is relative.

"You never know whatŌĆÖs perfect, because there may be another storm thatŌĆÖs even more perfect. Many say the 1974 super outbreak was the ultimate event," he said.

In 1974, a super outbreak of tornadoes churned through 13 states, killing hundreds of people.

One thing is certain: Way┬Ābefore Wednesday's storms came, forecasters saw the ingredients for trouble in the skies.

But "saying a significant weather outbreak is coming is quite different from saying a massive tornado will move through Tuscaloosa┬Āat 5 p.m.," Carbin said. "So knowing the big picture is pretty good, but you donŌĆÖt know the specifics; you only know really after the thunderstorm begins to form."

ŌĆ£Tornadoes typically form from what are called super-celled storms,ŌĆØ Greg McFarquhar, a professor in the┬ĀAtmospheric Sciences Department at the┬ĀUniversity of Illinois, told CNN on Friday. ŌĆ£You need a number of different ingredients. One is warm, humid air toward the surface. You need some sort of trigger that will start that air rising, that is associated with a cold front, and then a third ingredient is instability in the atmosphere,ŌĆØ he said.

Other agencies were issuing advisories as well. NOAAŌĆÖs Storm Prediction Center in Norman, Oklahoma, issued its highest threat warning - ŌĆ£high riskŌĆØ - for parts of the South. Shortly after, the prediction center issued red-colored headlines on its advisories, noting the likelihood of ŌĆ£destructive tornadoes ŌĆ” large hail up to 4 inches in diameter ŌĆ” and dangerous lightning.ŌĆØ

Another crucial ingredient was wind shear: volatility in wind speed and direction.

"Storms happen all the time," Carbin said, "but for those storms to last, you need wind shear. ┬ĀIf not, it will actually self-destruct. Wind shear will allow the storm to form a very efficient chimney, so to speak," he said.

On top of it all was a┬Āfast-moving storm system┬Āthat raked parts of six states.

"It first showed up in Mississippi," Carbin said, "and at the same time, it wasnŌĆÖt just one storm, it was five, 10, 15 erupting one after another in a 30-minute span. We know that. What we don't know is how to provide a specific pinpoint forecast of a violent tornado. That's still out of reach."

Armed with data from the National Oceanic and Atmospheric Administration and the National Weather Service, meteorologists in the affected regions went live with coverage of the stormsŌĆÖ path. But there was a major problem in getting the word out.

High winds associated with the storm had already caused power outages in several areas of the tornado zone as tree limbs snapped and power lines fell. Henson said he heard anecdotally that some NOAA weather radio transmitters were down as well, adding to the confusion.

Among the series of storms was at least one, in Smithville, Mississippi, that was an EF5. The National Weather Service in Memphis, Tennessee, said Friday the twister was Mississippi's first EF5 in more than 40 years.

An EF twister generates winds of more than 200 mph, according to the┬ĀNational Oceanic and Atmospheric Administration.

In Alabama, where most of the damage was done, media and residents are calling another twister, captured on video, simply a "monster."

But how could so many people perish in an event that was forecast?

"Sometimes, we assume that getting the warnings issued is the only task that needs to be done, " Henson said. "But we're seeing that even when the warnings are out, we can still have many people killed."

He said the death toll may speak more to how people live today. "You can have perfect warnings, but if people donŌĆÖt act on them ŌĆ” and when you have an event this big, youŌĆÖre going to have some casualties. The open question is: Did there have to be 300?ŌĆØ

"I am concerned that there are a lot of places where safe shelter is just not a priority," Henson said.

Carbin said storms need to be studied more, particularly when many factors are involved.

"Once a storm becomes part of an environment, does it enhance wind conditions or deteriorate them?" he said. "We still donŌĆÖt understand all of those interactions yet."

3:15 pm ET May 24, 2022 RETWEET
Researchers showed that humans living in warmer temperatures do not adapt to heat as well as those living where it'ŌĆtwitter.com/i/web/status/1ŌĆ”me
CNNweather

3:15 pm ET May 24, 2022 RETWEET
Researchers showed that humans living in warmer temperatures do not adapt to heat as well as those living where it'ŌĆtwitter.com/i/web/status/1ŌĆ”me
CNNweather

An Iraqi national has been arrested and charged in an alleged plot to assassinate former President George W. Bush cnn.it/3MLDZkM
cnnbrk

3:10 pm ET May 24, 2022 RETWEET
Stocks surge on positive earnings news from JPMorgan Chase and other banks as investors pause their May selloff. ThŌĆtwitter.com/i/web/status/1ŌĆ”mL
cnnbrk