House votes to fund government through December 16, averting a shutdown hours before a midnight deadline. The billŌĆtwitter.com/i/web/status/1ŌĆ”qf 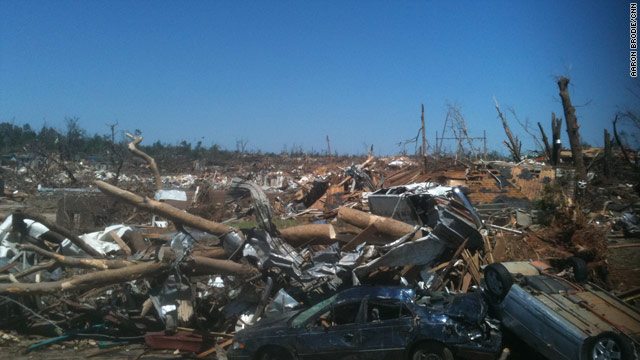 Scenes from a tornado disaster zone: 'It just gets worse and worse'

As a photographer capturing disaster scenes, CNN's Aaron Brodie says he looks for evidence of what used to exist among the devastated landscape. He struggled to find those details as he toured the mangled ruins of Alberta, Alabama, with CNN's Wayne Drash after a tornado tore through the Tuscaloosa neighborhood Wednesday. Here's his description of the scene:

We showed up in town at a CVS drugstore in Tuscaloosa as workers were putting boards up on the windows. It was pretty banged up: Windows were blown out, cosmetics and drugs were on the floor. Four college students came up, put bottled┬Āwater into shopping carts and said they were going to a neighborhood called Alberta. It seems really bad over there. NobodyŌĆÖs paying attention, they said. People are just walking around in a daze with their belongings in a bag.

Ground Zero in Alberta: Horror and hope, tears and prayers

They drove us through these back roads to get to Alberta. When we got there the road was blocked off and the neighborhood officially evacuated because of natural gas leaks. We sneaked in on a back road and found there were still some people there. We wandered street by street looking for what we had been told was a newly constructed elementary school that had been destroyed.

The houses were small, old, wood-framed. The residents are┬Āon the lower economic rung and many are elderly. It seems to be the kind of neighborhood people call home their entire lives.

We continued walking toward where the school was supposed to be, talking to people on the way. A lot of those who survived didn't have injuries and were in amazingly good spirits considering the circumstances - in some cases even laughing and telling jokes. What else can you do when you've lost everything?

As a photographer you look for the details that show what was once there. But I couldn't even find the details; things were just mangled beyond recognition. The further we went, the worse it got. We got to the school and the entire front wall was blown down. You walk around and there are no walls, parts of the roof were gone. Walking inside, you can see the linoleum tile on the floor. I sat down on a carpet in the library, and there were no walls, no roof;┬Ā just a single shelf of books. You wouldnŌĆÖt know it was a library if it weren't for the books.

We thought, we've gotta get back and get this stuff out on CNN. We circled back in the car, tried to get out the way we went in, went to a Home Depot and got a whole pack of 24 water bottles for $3 - you'd think they would've marked it up.

We come across a Big Lots that we'd heard had taken a hard hit. It was basically gone. If anyone had been in there when the tornado hit, I can't see how they could have survived. The cars in front of Big Lots were piles of metal and scraps. Apart from a bumper that said Mustang, you couldn't tell the make of the cars.

There were gawkers everywhere. There were kids walking around in the debris, 8-year-olds and parents out there with kids in strollers behind yellow police tape. People driving around trying to get a look wherever they could.

The sun went down and we wanted to get back to hotel before dark.

Friday morning we went back to Alberta. We were blocked off from where we wanted to go while President Obama toured the area.┬Ā Afterward we went to Alberta┬Ā Baptist Church. It was pretty hard hit but still standing.

A block away was the worst devastation I'd seen, just when I thought it couldnŌĆÖt get worse. Up on a hill, looking down a rolling valley, you could see the path - you could tell where the tornado had been. The same kind of piles we saw at Big Lots but as far as the eye could see. Bark was stripped off trees, lightposts bent -┬Āabsolutely nothing was recognizable. Upside-down cars smashed in, it just went on and on. It looked like a wind had come though there that was so powerful that nothing could stand in its way. The trees that did remain were like sticks: no leaves, no limbs, no bark. There were no recognizable structures, all you could see was piles.

Amid this, people were walking out┬Āfrom Alberta in droves. One guy had a dolly with a garbage can and all his stuff in it. Another guy was carrying all of his sister's possessions wrapped in a cloth - her stuff and the stuff belonging to her five kids. It was a steady stream of people who lived there coming out with what little possessions they had left. People were also coming in on ATVs and four-wheelers, wanting to help out, asking, "Do you want burgers or chips?"

People were saying it was like an atomic bomb went off, and when I was at CVS I was like, "Yeah right." But after what I've seen ... I'm sure there is some disaster in modern America where the damage per square foot would compare, but I honestly donŌĆÖt know what it is.

We saw elderly people in wheelchairs - these are people who can least afford to come back from this. If they owned their house or their car, is their insurance going to take care of it all? TheyŌĆÖve lost a lifetime of memories, their photos were probably blown into Birmingham. Where do you even start to rebuild?

This is the fifth tornado I've covered. I've covered tornadoes in Texas. But the devastation here, you can't even quantify this next to the others, it's not on the same scale. We've seen 5 miles of it in little more than two days. But you could probably spend two weeks surveying the destruction. For a tornado, the damage is astoundingly widespread.

Driving back to Atlanta, IŌĆÖm almost to Birmingham and still seeing trees snapped off. I stopped to┬Āfill up┬Āin Talladega, Alabama. A gentleman inside was talking to the clerk trying to get permission to buy 50 gallons of gasoline. He had two gas cans, and he said his frustration was he couldnŌĆÖt get more cans. He had two generators, and he was heading to┬ĀDeKalb County, Alabama, where they have no power and the gas stations can't pump anymore. Just an ordinary guy at a gas station in Talladega, trying to get fuel for an entire town.

Dow ends the month down nearly 9%, its worst monthly drop since March 2020, when pandemic lockdowns started in theŌĆtwitter.com/i/web/status/1ŌĆ”CT
cnnbrk

4:24 pm ET September 30, 2022 RETWEET
Police are responding to reports of shots fired at a hospital in Austin, Texas. The hospital has been placed on locŌĆtwitter.com/i/web/status/1ŌĆ”ut
cnnbrk